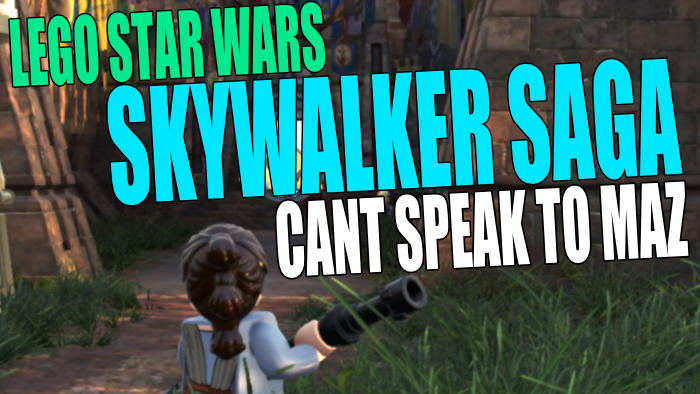 The Lego Star Wars Skywalker Saga has been out for a little while now, and we have really enjoyed this awesome game. If you have been playing through the campaign and completing the story missions either solo or split-screen with a friend, then you might have all of a sudden come to a stop. And that is because you cannot “Speak to Maz” in The Skywalker Saga: The Force Awakens.

So it is a bit of a disappointment if you are enjoying The Force Awakens Episode, and have got to the Story Mission called Friends of the Resistance and are unable to complete it. The mission details are to “Speak to Maz”, but there is one problem and that is that you cannot speak to Maz, and it does not seem to be working in The Skywalker Saga game!

Can I fix the Speak To Maz mission not working in The Skywalker Saga?

Hopefully, it’s something that will get fixed in the next patch for the game, because at the moment there is nothing you can do to fix not being able to talk to Maz in Lego Star Wars Skywalker Saga. Unfortunately, all you can do is begin your adventure in a different episode until the issue is fixed.

It’s always worth completely closing down the game and restarting your console, and then try launching the game again. If you are lucky this may work for you.

Where Is Maz In Lego Star Wars: The Skywalker Saga?

Maz is located at the beginning of the Maz’s Castle entrance, as soon as you enter. But as we said before, at the moment you may not be able to talk with Maz until this annoying glitch gets resolved!

We hope the above guide has answered the question you had about not being able to find or talk to Maz in the Lego Star Wars Skywalker Saga. It’s not really what you probably wanted to hear, but for now, there is not a great deal that can be done other than having fun on some other missions and collecting those blue bricks.

If you did enjoy this guide and found it helpful then we are sure you would like all of our other gaming guides here.