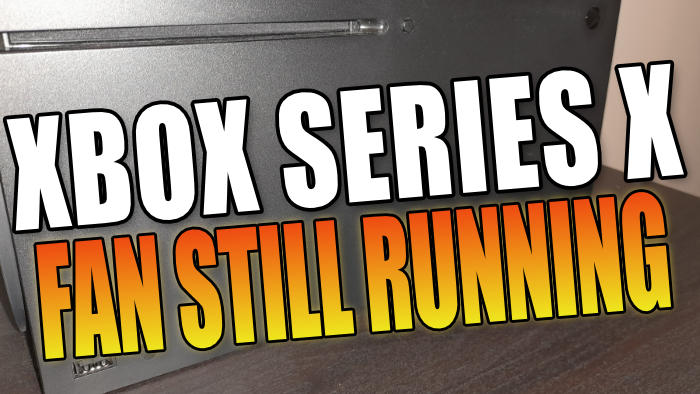 In this guide, we will be taking a look at why your Xbox Series X is still running even after turning it off. You may have noticed that the fan is still running on your Xbox series x after pressing “Turn off console” or pressing the power button on the console, and there is a good reason for this.

This is because it’s not fully shut down and by default, it’s in standby mode even though you have powered down your console. But this is helpful as your Xbox can still download and update games while it’s off and in this mode.

There is however a way to completely shut down your Xbox series x, which will stop the fan from spinning when your console is off. And that’s what we will be taking a look at in this guide.

Why is Xbox Series X fan still spinning after turning off?

The reason the fan is still spinning after you have turned your Xbox Series X off is that the console is not actually off. As we mentioned above, it is in more of an idle/standby mode which allows your console to download, update and resume games or access your Xbox home screen quickly.

So this is great, as it can be very frustrating when you go to play a game and you then have to wait 30 minutes for the game to update or install!

Can you stop Xbox Series X going into standby?

If you do not want your Xbox Series X fan to keep spinning and remain in an idle state then yes, there is a setting that you can change which will completely turn off your Xbox Series X without the need of having to go into the Settings to do a full shutdown every time.

How to fully shut down Xbox Series X:

Below we have listed the steps on how you can fully shut down your Xbox series x, and this will stop the fan from spinning when turning off your Xbox.

1. Open settings by pressing the Xbox button on your controller > Go to your profile icon > Now select Settings

2. Once in settings go to the General tab then enter Sleep mode & startup

3. You will now see an option to do a Full shut-down so select this button

4. Now press SHUT DOWN and a full shutdown will happen > Your Xbox Series X fan will no longer spin and your console will be completely turned off

We hope the above guide has helped you fully shut down your Xbox Series X and given you a better understanding of why the fan is still running when powering down your console. At least you now know it’s perfectly normal for the Xbox series x fan to spin if you have Standby enabled.

If you did find this guide helpful then we are sure you would like all of our other gaming guides.