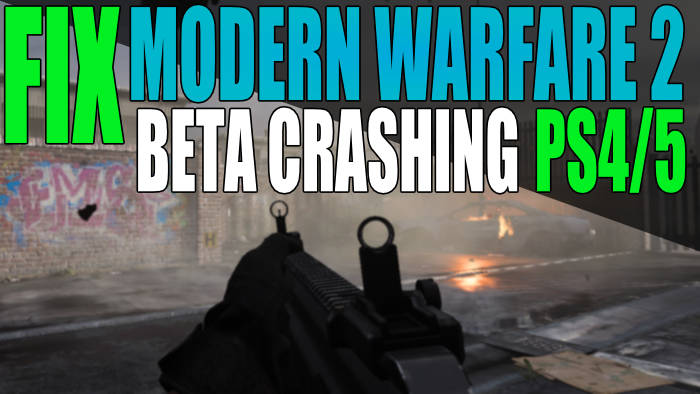 In this guide, we will be taking a look at methods on how to fix the MW2 Beta crashing on your PS5 or PS4. If you are having problems with Modern Warfare 2 crashing and not loading then this can be very frustrating. Luckily, there are a couple of things you can do that should get you back into the game! However, just keep in mind that the game is currently in Beta, so it will have the occasional issue on your PlayStation console.

The time has come again for a new Call of Duty, this time bringing the much-awaited Modern Warfare 2. Being a huge fan of the COD series I have been looking forward to this one, especially as I loved the first Modern Warfare. It’s great fun sitting back playing with friends and trying to get to the top of the leaderboards in the different game modes such as Team Deathmatch, Search and Destroy, etc.

But seeing as you are on this guide then this means that you are having problems with Modern Warfare 2 Beta not working or not loading on your PS4 or PS5. So below, we have different methods that you can try to get you back into the game ASAP.

Why is the MW2 Beta crashing on PS5/PS4?

There can be many things that can cause Modern Warfare 2 Beta issues on your PS4/PS5. It may crash on startup, keep crashing, give you sign-in errors, or get stuck on the loading screen.

As the game is currently in Beta it is going to have problems as the purpose of a beta is for testing and improving the game. But if your console is not running the latest system update it could also cause issues, or it could even be that you have the game installed on an external drive and it’s causing crashing problems.

Below we have listed several different methods that you can do to fix the game if Cod MW2 keeps crashing and if it won’t load on your PlayStation 4 or PlayStation 5 console. You will need to try each method until one fixes the problem that you are having.

Check that there isn’t a new update available for your PS4/PS5. If there is then install it as not only could it help fix the crashing issue that you are having but it can also add new features:

As the game is currently in beta the chances are there could be a new update available and if you have automatic updates disabled you won’t see this, so check if there is a new update:

Completely shut down your PlayStation and turn it off at the mains for 60 seconds. Then power it back on and try Modern Warfare 2 again. Trust us, doing a shutdown can resolve many problems!

Try a different user profile on your PlayStation just in case it is a problem with your profile.

If you have a headset, controller, keyboard, mouse, USB, etc plugged into your PlayStation then unplug all the devices then try launching Modern Warfare 2 Beta, as one of these could be causing the game to not work.

Clearing your console’s cache will remove all the temporary files, allowing your PlayStation to regenerate new ones and hopefully fix the issue you are having.

Try rebuilding your PlayStation database. If something has gone wrong with the database then this can cause issues around your PS home but also with the games:

If none of the above methods helped fix Modern Warfare 2 2022 Beta not working and crashing your PlayStation then the next thing to do is reinstall the game:

We hope the above guide has helped you fix Call Of Duty Modern Warfare 2 Beta crashes and it not working while playing on your PS. And hopefully, you can now get back to trying to win a couple of matches in-game!

If you enjoyed this guide and found it helpful then we are sure you would like some of our other gaming guides.