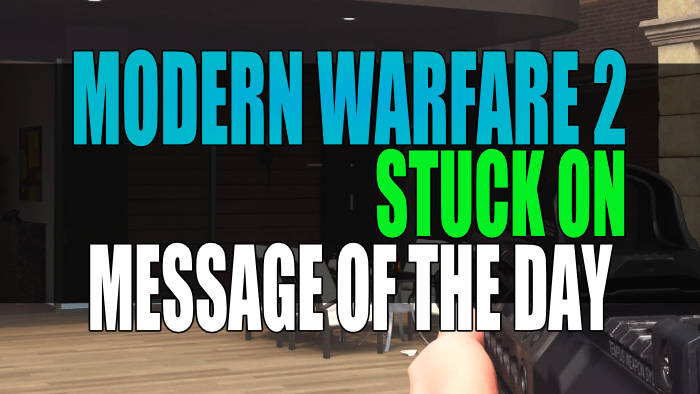 In this article, we will be taking a look if you are having a problem with the Modern Warfare 2 Beta stuck on a “MESSAGE OF THE DAY” message loop. Have you just signed into the Call Of Duty Modern Warfare 2 Open Beta for the first time on your PS5 or PS4? If so then you will have the message of the day displayed. But when you press the back or circle button on your controller, you end up with the signing-in screen again and have to press X and log in again!

Don’t worry as there is a good reason behind this and it’s not something wrong with your PlayStation.

The Modern Warfare 2 open beta so far has been a blast, and it was worth the wait! The new improvements within the game have made a difference from previous COD games, such as not being able to slide cancel and the improvements to the sounds like 3D footsteps.

But you are not here to read about the game and you want to know how to fix mw2 beta stuck on message of the day. So below we have written what you need to do.

MW2 Beta Stuck on message of the day

So if you have just launched the Call Of Duty Modern Warfare 2 Beta and it appears you are stuck on the “message of the day” and in a logging-in loop, then there is no need to worry. And you won’t need to reinstall the game.

If you keep pressing back on your PlayStation controller to get rid of the message of the day that pops up, then this is where you are going wrong.

MW2 Beta is not actually stuck on the screen and you are actually already on the main menu. You just need to simply press down on your joystick and you will then be able to join into a match. It sounds so simple but easily missed, as it isn’t obvious that you are on the main menu at first!

You can then choose from some of the popular game modes such as:

We hope the above has helped you get into a game within the COD Modern Warfare 2 Open Beta.

If you liked this article then we are sure you would like our other gaming guides.