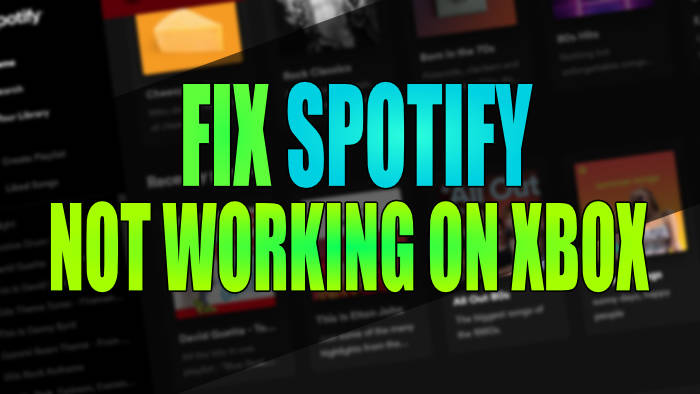 In this guide, we will be taking a look at how to fix Spotify not working on Xbox. If you are trying to listen to your favourite music but the app keeps crashing, not loading, or just not doing anything every time you try and stream some songs then don’t worry. There are a couple of things you can do that should fix Spotify problems on your Xbox One or Xbox Series X|S.

Spotify is the app that allows us to stream all of our favourite music, awesome albums, or you can download or add them to your playlist. And this is all fantastic if you are able to get the Spotify app to work.

However, seeing as you are on this guide means you are having Spotify issues such as it freezing or won’t load on your Xbox console. So below, we have put together a list of different methods you can do to fix the problem.

Why is Spotify not working on Xbox One/ Series X|S?

Many things can cause Spotify to crash or not open on an Xbox. For example, if you are trying to stream your music on Spotify while trying to play an online game, not having the latest update installed for the app, or it could even be due to the installation/download of Spotify went wrong.

How to fix Spotify problems on Xbox

Below we have listed different methods that you can do to fix the Spotify app on your Xbox One or Xbox Series X|S. You will need to do each method until one resolves the issue that you are having.

Check if the Spotify servers are not currently down or having issues. If they are then this can cause problems with it not working:

Fully shut down your Xbox One or Xbox Series X|S and once powered down switch it off at the mains and leave it for 60 seconds.

This will give the console a nice fresh start when turning it on again.

Run an internet test on your console to ensure there is not a problem with your connection and that you are connected to the internet:

Ensure you have the latest update installed for your Xbox. If there is a new update available it could have a fix to resolve the issue you are having with the Spotify app:

Try switching user profiles on your Xbox in case there is a problem with the current user that you are signed into that’s causing the issue.

If none of the above methods helped fix Spotify not working on your Xbox then the next thing to do is reinstall the app on your console.

We hope the above guide helped fix Spotify not working on your Xbox and you can now stream your favourite songs to your Xbox, while just on the Dashboard or while playing a game.

If you enjoyed this guide and found it helpful then we are sure you would like our other Xbox guides.