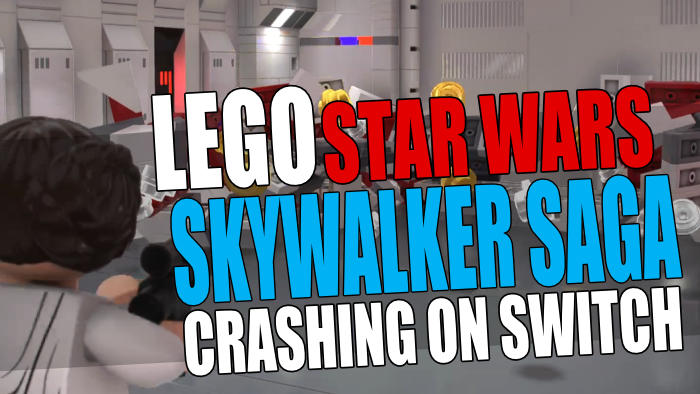 Are you getting Lego Star Wars Switch crashing and not loading issues? The Skywalker Saga is another one of those awesome Lego games that you have just got to play. Especially if you are a fan of Star Wars! But the fun can soon come to an end if Lego Star Wars keeps crashing, not launching, and getting stuck on the loading screen on your Nintendo Switch console.

Within The complete Skywalker Saga, you get to experience all nine Star Wars movies with your typical added Lego comedy. You also get to explore the Star Wars galaxy as a droid, bounty hunter, or of course our favorite a Jedi! Luckily there are a few things that you can do to hopefully fix the issue you are having with the game, and that’s what we will be taking a look at in this guide.

You might be worrying that your Nintendo Switch is broken but don’t panic just yet as the chances are it’s just an issue with the game itself. It could be that the Lego Star Wars video game files have become corrupt, your saved data has become corrupted, or it’s a setting you have set on your Switch console.

If you try a few other games and don’t have any issues, then you know there is something with the Skywalker Saga game causing the problem and making the game crash and not load. Or if you have crashing and freezing issues with other games as well, then it may be caused by outdated software on your Switch.

What Will The Methods Fix?

Lego games have been available for the Nintendo Switch for a long time now, and just like other games, there will sometimes be the occasional issue. Below I have listed different methods which aim to hopefully fix most problems with Lego Star Wars: The Skywalker Saga such as:

Those are just a few different examples of what the methods will fix. If I didn’t list the issue you are having don’t worry as I can’t list all of the problems with Lego Star Wars: The Skywalker Saga on the Switch!

Below I have listed different methods you can do that will hopefully fix Lego Star Wars: The Skywalker Saga not working on your Nintendo Switch. And you will be playing the game in no time, without it getting stuck on the loading screen or not launching.

Make sure your Nintendo Switch console has plenty of battery. If you are playing Lego Star Wars with your Switch undocked, then you could have issues with the game freezing or not launching if the battery is low.

It is important to make sure that your Switch console has the latest system updates installed, to help with performance and fix any bugs or issues. If your software is outdated then that may be why the skywalker saga is freezing in-game or keeps crashing:

Sometimes you will need to wait for a future update for a game to fix any bugs or issues. However, if you do not have the latest game update installed then you will more than likely get freezing and not launching issues:

It may sound simple, but if your Lego game card is not quite inserted properly or is even the wrong way around in the Switch, then the skywalker saga will not launch and will just keep crashing on startup. So take out the game and then push it back in again (it should make a small click).

If your game is crashing or freezing when you are playing it handheld and undocked, then try docking your Switch and playing it on your TV. Or if that’s when you get the issue then try playing undocked and see if one is causing you issues.

Try signing out and then switch users and try and launch the game again. There could be something conflicting between your user and the game. If you purchased a digital version of the skywalker saga then make sure you sign in with the profile that you purchased the game on.

If one of the game’s files was corrupted when either installing or updating, then this will stop lego star wars from launching. Luckily you can scan your Nintendo Switch for corrupted game data to then hopefully repair any files or data:

Delete the game from your Switch and then install it again. This may fix any issues that you are having with the game. If you did install the game originally on an SD card then try installing it on your internal storage:

I hope the above methods have helped fix any launching, loading, or crashing issues in Lego Star Wars: The Skywalker Saga on your Nintendo Switch.

If you are still having issues with the game not working on your Switch then you might need to think about resetting your Nintendo Switch, or you will need to wait until a new patch/update is released for the game that resolves the issue you are having.

If you found this guide helpful then we are sure you would like all of our other gaming guides here.