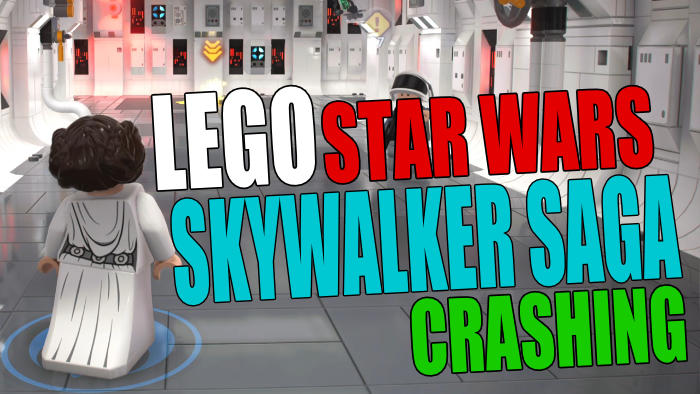 Finally, the wait is over, and Lego Star Wars: The Skywalker Saga is available to play on the Xbox One and Xbox Series X & S. We have to say we have been looking forward to playing this game ever since we initially saw the first trailer for the game. But if The Skywalker Saga game keeps crashing to your Xbox home screen, or gets stuck on the Xbox loading screen, then that’s no fun at all!

Why wouldn’t you want to blast through the galaxy playing through NINE Star Wars movies that have been turned into Lego games? And to make things even better you can also do this with a friend in local 2 player coop.

There can be many reasons why the Lego Star Wars Xbox game is crashing, freezing, and not loading on your Xbox console. It could be that you are running low on disk space or one of the game’s files has become corrupted. Or you just haven’t updated your Xbox in a while, which can cause some issues. Luckily unlike PC, it’s usually easier to resolve the issue.

What If The Methods Don’t Fix The Skywalker Saga Not Loading?

If you are still having problems with the game not working on your Xbox then you might need to think about resetting your Xbox back to its factory default settings. Or if you are happy to wait, then you could wait until a new patch/update gets released for the game that hopefully resolves the issue you are having.

As we mentioned above, the issue you are facing may be fixed by a patch for the lego game. So try manually checking for updates for the game:

Make sure that your Xbox has enough airflow circulating around it. For example, don’t shut it in a draw with no ventilation. If your Xbox fan is blocked or the console overheats, then this will cause your Lego Star Wars game to crash or keep freezing.

If the skywalker saga is stuck on the loading screen, menus, or has just frozen in the middle of a level, then a simple restart of the game or console could fix this. As it could have been a one-off issue.

Make sure no other users are logged in on your console, as this could be conflicting with the game making it crash.

Make sure no other games or apps are running in the background such as Spotify. Also, if you have any updates or games downloading try pausing these. Any of these things could be conflicting with Lego, making it crash or freeze, or not even launch.

Make sure that you have the latest updates installed for your Xbox. If you have a system software update pending then this could be causing the skywalker saga to not launch or crash:

Ensure you are not low on internal storage space as this could make lego star wars run slow and keep freezing, and get stuck on the loading screens or menus. Then you will have to restart your game or console and potentially lose your progress:

If the game’s files were corrupted on installation, or even an update then this will cause you crashing and loading issues in the Lego skywalker saga. So, unfortunately, you will need to delete the game and then install it again. You could back up your saved data first so that you can restore it if needed:

If your saved data is corrupted then you may need to remove it. Make sure you have made a backup before you do this as you may be able to restore it if this isn’t the cause of your problem:

We hope the above methods helped fix Lego Star Wars: The Skywalker Saga on your Xbox, and your game no longer keeps getting stuck on the loading screen, crashing, freezing, and not loading at all. Hopefully, you are now able to enjoy the 9 LEGO Star Wars games either solo by yourself, or with friends in local co-op.

If you did enjoy this guide on fixing the Lego Star Wars Xbox version, then we are sure you would like our other gaming guides here.