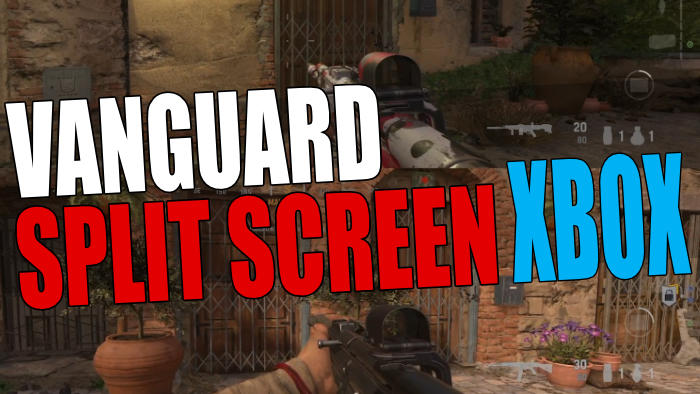 In this guide, we will be taking a look at how you can play 2 player split-screen in Call Of Duty Vanguard on your Xbox One or Xbox Series X/S. This first person shooter is set in World War 2 across the Eastern and Western Fronts of Europe, North Africa, and also the Pacific. And this game is great fun if you team up with a friend and play split-screen in Cod Vanguard Multiplayer.

As you most likely already know there is a lot you can do within COD Vanguard. It has a great campaign, which like other Call Of Duty titles we have enjoyed the campaigns. And it is nice they have not scrapped the campaign unlike Battlefield 2042! Zombies again is a great comeback, which we enjoyed in Black Ops Cold War, and as always our favourite Multiplayer.

But the reason you are on this guide is if you are getting a little bored of playing Multiplayer on your own you can play with a friend on split screen on your Xbox. You can even play against each other in a local 2 player match. And as we said above, we will be showing you how to play split-screen in COD Vanguard. Did you know you can also play split-screen in Vanguard on PS5 & PS4?

When we say split-screen on Call Of Duty Vanguard on your Xbox, we mean getting two controllers and playing on the same TV. You then have the choice to either play online against other players or you can play against each other in your own local game.

Can You Use An Xbox One Controller On Xbox Series X/S?

Yes, you can use an Xbox One controller in Call Of Duty Vanguard on split-screen. All you need to do is connect your Xbox One Controller to your Xbox Series console, and then you can jump into an online match or a local match.

Below are the steps for setting up a split-screen match in COD Vanguard on your Xbox.

1. First you need to launch the game then go onto Multiplayer

2. You will notice in the top right corner that it is asking you to “ADD A CONTROLLER FOR SPLIT SCREEN“

3. So once you are within the game you now need to turn on your second controller

4. Next, you will notice a message in the top right corner saying “PLAYER 2 PRESS A TO SIGN IN“

5. Go ahead and press A on the second controller

7. You will now see the second player has joined and is on the screen > You can now go ahead and join into a game mode of your choice

We hope the above guide has helped you set up split-screen in Call Of Duty Vanguard on your Xbox One or Xbox Series X/S. And you are now playing either online multiplayer against other online players, or just having a laugh and playing against each other in some local 2 player split-screen fun!

If you did find this guide helpful then we are sure you would like all of our other gaming guides.

Check out the video tutorial here on HOW TO SPLIT SCREEN IN COD VANGUARD MULTIPLAYER ON XBOX ONE if you are getting stuck.