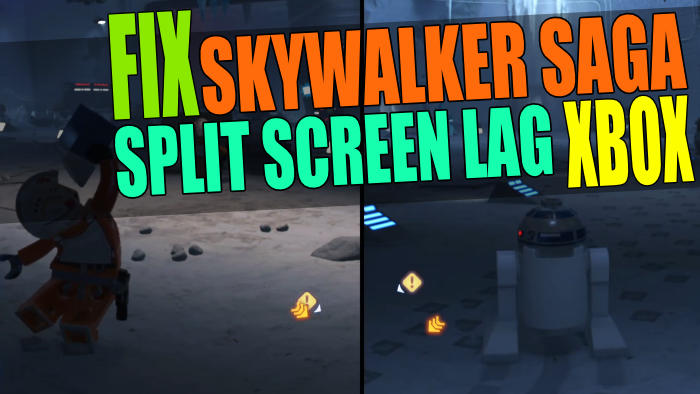 In this guide, we will be looking at fixing issues with Lego Star Wars: The Skywalker saga being laggy on Xbox. The Skywalker Saga is an awesome game that seems to be very popular. Probably because we have 9 star wars movies to play, with the added Lego humour! But if you are like us and love to play split screen, then you may have noticed that Lego Star Wars The Skywalker Saga at times can feel laggy and delayed in split-screen mode, on your Xbox One or Xbox series X/S.

I love this game as not only do you get to explore the galaxy completing missions and collecting bricks across the different movies, but you also get to battle in flight! But it’s no fun if the Lego star wars game is stuttering or lagging, making it hard to play on 2 player split-screen with a friend.

So in this guide, I have listed a few methods that will hopefully fix any issues you have been having like lag and delay in the Lego Skywalker Saga split screen on your Xbox console.

Why is 2 player split screen laggy in Lego Skywalker Saga?

There can be many things that can cause the game to start stuttering, lagging, or giving a delayed response on Xbox Series X|S or Xbox One. It could be something in the background of your Xbox updating, your controller is getting low on battery, or you don’t have the latest version of the game that’s resolved some of the issues with it.

Below are different methods that you can do that will hopefully help resolve the lagging and stuttering problems you are having with 2 player split screen in Lego Star Wars:

Turn off your Xbox and unplug it from the socket. Then wait 60 seconds and plug it in and power your console back on. Then launch the game and try out split screen.

If you have an update pending for your Xbox then this could be the reason you are having issues with the Lego game, so go ahead and check for updates:

If the battery is getting low in your controller then this will cause delays with your console and with the Skywalker Saga in Split Screen. So try swapping the batteries for new ones.

Fix 6: Disconnect from the internet

Disconnect your Xbox from the internet as it could be internet connectivity going on in the background on your Xbox causing the issues with the game.

The Lego Star Wars game might be struggling in split-screen with the resolution you have chosen, so try lowering it:

If you have set a high refresh rate on your Xbox try lowering it as this could cause major lagging and stuttering in Lego Star Wars:

If your TV display has an option for a game mode then ensure you have this enabled. As this can help fix lag, delay, and unresponsiveness when playing games on your Xbox.

If you have installed Skywalker saga to an external drive then try reinstalling the game to the Xbox internal drive. As it could be an issue with the external drive you are using.

I hope the above guide has helped resolve the lagging, delayed, and unresponsiveness issues you have been having on your Xbox One or Xbox series X|S in Lego star wars Skywalker saga. As I previously said, the game is very enjoyable on 2 player split-screen just like other Lego games.

We hope this guide helped you out and you enjoyed it. If you did find the guide helpful then we are sure you would like our other gaming guides here.