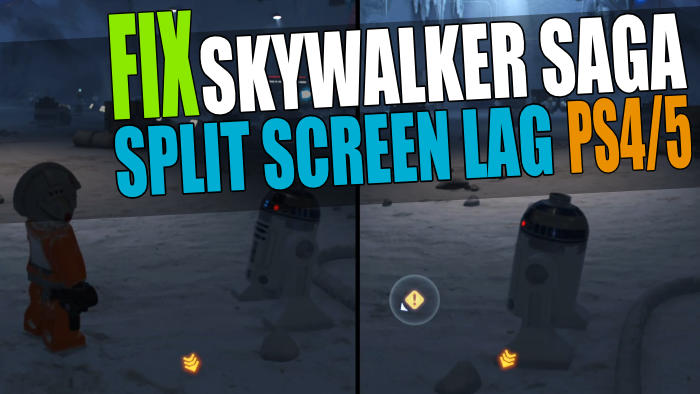 In this guide, we will be taking a look at how you can fix laggy, stuttering, and delayed gameplay in Lego Star Wars: The Skywalker Saga split-screen, on your PS4 or PS5. The Skywalker Saga has been out for a little while now and you may have already completed Story Mode, or are just messing around in Free Play. If you have done this solo and now decided to get a friend to help with some of those harder challenges and levels, then you will have probably set up 2 player split screen in Lego Star Wars.

I absolutely love playing Lego games on split screen, and they make a great 2 player couch-play game on your PlayStation console. But that’s only when everything is running smoothly. And unfortunately, at times you can end up experiencing lag, stuttering, and basically almost unplayable game play within the Lego Skywalker Saga game in split screen mode.

Luckily for us, there are a few things that you can do that should resolve the issue you are having or at least help make the game a little more playable on split screen on your PlayStation 5 or PlayStation4.

There can be many reasons why you are having issues with the game in local 2 player split screen on your PlayStation. It could just be a simple case of Lego Star Wars needs updating, your system had a pending update, or you need to just do a simple restart of your console.

What If The Methods Don’t Fix The Issue?

If the methods do not help resolve the lag and stuttering issues you are having in Lego Skywalker Saga split screen, then you might need to wait for a patch for the game that resolves the issue. Or you might need to reset your PlayStation.

But if you are not having issues with your other PS games then it’s more likely an issue with the game itself.

Sometimes all a console needs is a simple restart to fix things.

If you have a system update pending and are not using the latest version, then that could be your issue. As new updates usually resolve known issues with a PlayStation console:

Same as updating your console it’s important to ensure you have the latest update for the game. As it will have most known bugs and issues fixed such as issues like split-screen being laggy in Lego Star Wars:

If your controller is running low on battery it’s not going to perform as great as a fully charged controller, so make sure your PS controller is charged up.

There could be something interfering with your wireless controllers, so see if you have the same issue with a wired controller.

Some aftermarket controllers are not the best at performing so try giving official PlayStation controllers a try if possible.

If you are using a really high resolution then this could be causing The Skywalker Saga to lag, so try lowering the resolution:

If you are using the maximum FPS within Lego Skywalker Saga then try lowering the frame rate. Or if you already have it set to 30 FPS then raise it to 60 FPS:

There could be an issue with your PS Database so a rebuild should resolve this. This can take a little while and it’s always worth backing up your data before, just in case:

If you have installed the game to an external drive move it or reinstall it to the PlayStation internal drive. As the issue might be getting caused by your external drive

I hope the above guide helped resolve the issues you are having with Lego Star Wars The Skywalker Saga on your PS4 or PS5. And you are now sitting back with your friend and smashing out some of those harder missions to unlock even more awesome Star Wars characters!

If you found this guide helpful then we are sure you would like all of our other gaming guides here.