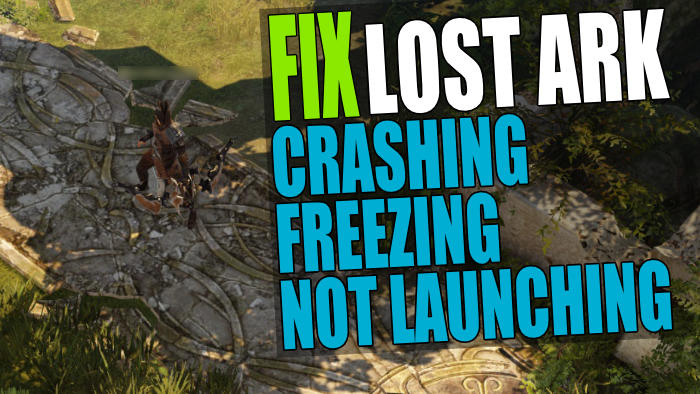 In this guide, we will be taking a look at how to fix Lost Ark crashing on PC. Lost Ark is a free-to-play RPG game that allows you to explore new lands, which is awesome. But it’s no fun if you have been playing this great game but you are having issues with Lost Ark crashing on the loading screen or freezing on your PC.

It’s currently only available for PC, and there are currently no plans for the game to be released on any consoles (at the time of writing this guide). So in this guide, we will be taking a look at fixing crashing and freezing issues in Lost ARK on a Windows computer. And if you still have not had the chance to enjoy this game properly, then you have a lot to look forward to!

Why does Lost ARK crash on startup & get stuck on loading screen?

The game has been out for a while now on Steam and published by Amazon games, and it’s had its number of issues when it comes to the game crashing, not loading and a common issue being “cannot connect to the server”.

You might have also noticed within a raid or dungeon that there are a lot of players that seem to be not moving and appear as AFK. But usually, this is a result of Lost Ark crashing on the loading screen and booting them out of the server. But their character still remains unmanned! So don’t panic this is not an issue with your computer.

So with all these errors and issues with the game being stuck on the loading screen, what is the cause? There can be many things that can cause Lost ARK to keep crashing on PC, and to keep crashing to your desktop. It could be that one of the game files has become corrupted or your Windows or graphics drivers are out of date.

What Will The Methods Fix?

The game has many different errors and crashes that can result in error messages like: “Cannot connect to the server. Exiting the game“. This can happen at any time like when collecting your rewards, or on loading screens in Argos and Abbys.

Another common issue is for Lost Ark to crash on the loading screen when trying to enter Chaos Dungeons, making the game crash to your desktop.

The methods we have written below are aimed at resolving all sorts of issues with Lost ARK on a Windows PC or Laptop such as:

Stuttering within Lost Ark can also be a problem at times, but its not always due to your system. It could be an issue with your connection or the Lost Ark servers. However, if your system is causing stuttering issues in the game then one of the methods below should help fix this.

It can be very annoying when trying to get that perfect reward from a raid or dungeon, and everything is just glitchy and stuttery and then crashes.

How to fix Lost ARK keeps crashing on PC:

Below we have listed the different methods to resolve all sorts of issues with Lost ARK Steam on a Windows 10 PC or Windows 11 PC. Hopefully, one of them will get this awesome game working on your computer again in no time.

Ensure there are currently no known issues with the Lost ARK servers.

If your PC specs are not up to the task of playing Lost Ark, then this will cause the game to keep crashing and freezing.

Ensure you are connected to the internet. If you have connection issues or you are not connected, then you will have issues with Lost Ark crashing and not launching.

Ensuring Windows is up to date is very important and can resolve many issues with Windows and games. So if you have any updates available go ahead and install them:

Make sure the game is up to date as a new patch for the game could fix the crashing or not loading issues you are having in the game:

If your video drivers are out of date then you are going to run into all sorts of problems when trying to play Lost Ark:

Run Lost ARK as an administrator as this can help resolve a lot of issues when it comes to the game crashing:

You can also try temporarily turning off your security/antivirus software to see if this is blocking your game from launching (remember your PC will not be protected while it is off).

If you have any programs or apps running in the background when you launch the game then these could be conflicting, causing the issue you are facing. So ensure everything is closed down first.

Lower the in-game graphics setting in case your system is struggling to handle the graphics, causing Lost Ark to crash:

If one of the Lost ARK game files has become corrupted or missing, then you are going to have issues with the game. In fact, it probably won’t even launch or will keep crashing to your Desktop. Luckily we can check if there is an issue with the game files using Steam:

If you have overclocked your system Hardware try removing the overclock settings, and see if that resolves the issue. Only do this if you know how to.

If the methods above have not helped fix the issue you have been having in Lost ARK then reinstalling the game will hopefully help. And if you are able to, try installing it to a different drive in case the drive you had it installed on has an issue:

We hope the above methods have helped resolve the issues you have been having with Lost ARK Crashing, freezing, or not launching and loading on your Windows PC or laptop. It can be annoying when a game won’t work correctly!

But as we said before, the above steps should have hopefully sorted the issue. If they didn’t then it might be worth checking out the Lost Ark Twitter page, and seeing if the problem you are having has been reported already.

If you liked this guide then we are sure you would like all of our other gaming guides here.