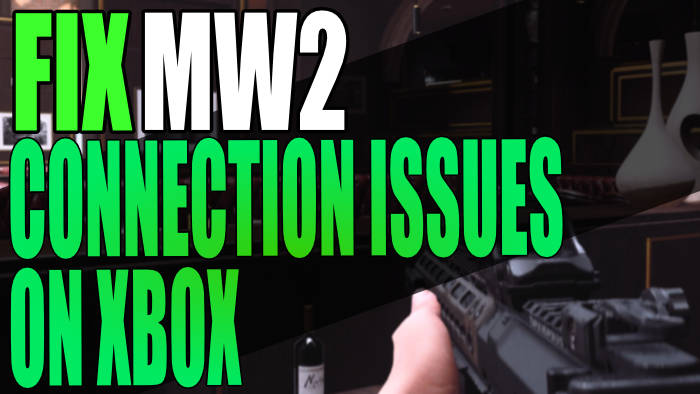 In this guide, we will be taking a look at how to fix MW2 lag and connection issues on Xbox. If you are trying to play the game on an Xbox One or Xbox Series X|S but keep experiencing disconnection errors, lagging, stuttering, getting stuck on the “checking for update” screen, etc, then there are a couple of things you can do. And that should get these issues sorted, so you can get back to enjoying the Modern Warfare 2 Beta.

Modern Warfare 2 has so far been very enjoyable just like the others, and trying to get in that first-place position with a decent k/d is something I enjoy doing. However, it can be hard to achieve this if you are having connection problems in Modern Warfare 2, or the game is very laggy when playing multiplayer.

So that’s why below I have put together different methods that you can do that should hopefully fix the issue you are having.

Why is MW2 Beta so laggy on Xbox?

Many things can cause the MW2 Beta to not work and to have network issues. Your game may keep disconnecting, won’t log in or give you a sign-in error, get stuck on the connecting screen, or just be really laggy making it unplayable!

The game is currently in Beta so there will be bugs or issues as we are just trying out the game at the moment. There may be problems with the COD MW2 servers, so if there is an issue then you are going to run into lag and connection issues. Or downloading in the background of your Xbox can cause many problems and will cause MW2 to have multiplayer lag. It could also be caused by your internet connection.

Below are the different methods for fixing most connection problems and having network lagging issues in-game, with the Call Of Duty Modern Warfare 2 Beta.

The first thing to check is that the Activision services are not offline and that everything is running OK. If the MW2 servers are down then you will not be able to connect online:

You can also make sure that the Xbox live services are currently running and that there are no outages:

Go to Activisions official Twitter page to see if they have posted anything about issues with servers, or servers being down and known issues.

Try giving your Xbox a simple restart and hopefully, you will be able to access the game again.

If a simple restart does not work then try clearing the cache:

Within the settings on your Xbox, you can run an internet connection test and also check your network statistics, to ensure you are getting a decent connection. If you are having issues then this would explain the lagging in the MW2 Beta:

It’s always worth updating your system software on your Xbox, as there could be a fix for the issue you are having, plus new features:

Sign out of your Xbox user and then sign back in again, to give your profile a refresh.

Also, make sure you are signed in with the user that has the subscription for the online services.

If you are connected via WiFi then this could be making your MW2 game laggy and also disconnect with errors. So if you can, plug in directly to your router via an ethernet cable to give a more secure connection.

Try giving your router a quick reboot. Just make sure no one else in your house is downloading!

If you have anything downloading or updating on your Xbox in the background, then try pausing them. If something else is using resources needed for the game then this will cause lag or connection problems.

If nothing else has worked then try reinstalling the Modern Warfare 2 Beta. A fresh install along with the latest version may fix your issue:

We hope one of the methods above helped fix Call of Duty Modern Warfare 2 lag & connection issues on your Xbox Series X|S or Xbox One, and you are now able to enjoy it and win that Team Deathmatch or Search and Destroy!

If you did like this guide and found it helpful then we are sure you would like our other gaming guides.