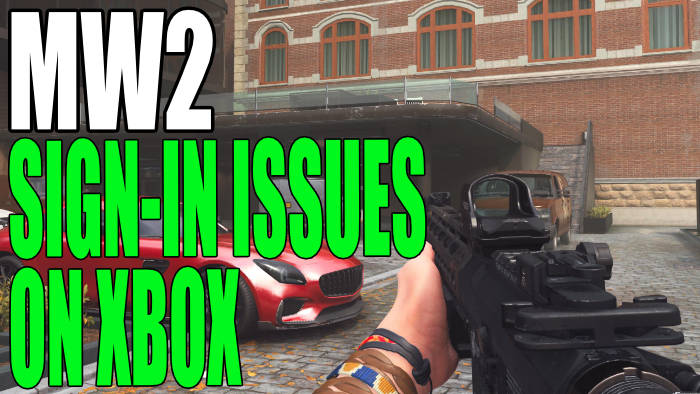 In this guide, we will be taking a look at what you can do to fix Modern Warfare 2 logging-in errors on your Xbox. Have you launched the game but keep getting a “failed to login” message or are getting stuck on the “logging into Demonware” screen? If these errors mean you can’t past the MW2 Beta login screen then don’t panic, as there are a couple of things you can do to fix these issues on Xbox One or Xbox Series X|S.

Modern Warfare 2 Open Beta is a great way of testing out the game before its release day. However, because it’s in a Beta then this means that the chances are it will have the occasional problem like the one you are currently having with not being able to sign in on MW2 Beta. So below we have put together different methods that you can do to fix this on your Xbox console.

There are a couple of things that can cause this error to happen on your Xbox. For example, if you are trying to access the beta too early and the servers are not currently live, a problem with the MW2 servers will also cause this to happen, and not being connected to the internet.

Any of these things could make you have an error such as “Failed to login” or you may even get error codes such as the BLZBNTBGS7FFFFF01, which is also common in COD Warzone.

Why am I stuck on the logging into Demonware message on Xbox?

If you were wondering what is Demonware, then it is a software development company linked to Activision. That is why you will see a Demonware message on the MW2 login screen.

If you have not launched the Beta yet, then you may find it takes ages to load and sign in! So when you get to the first loading screen and see “Status. Logging into Demonware” and it takes a while, don’t panic and think it’s stuck!

Just give it a little time to load and sync everything up, and then you should be able to get past the MW2 logging into Demonware message. If it has been more than a reasonable amount of time and you are just stuck on the logging-in screen, then see the methods below to fix this problem.

How to fix MW2 Beta Sign-in errors on Xbox

Below are the different methods for fixing Modern Warfare 2 Open Beta login errors and issues on an Xbox One and Xbox Series X|S.

If the servers for Call of Duty Modern Warfare 2 are having issues or are currently offline, then this can cause sign-in errors and Demonware errors:

Check out the MW2 Twitter Page to see if there are any tweets regarding not being able to sign in on MW2 open beta.

Ensure there are not any problems with your internet and internet speed, by running a test on your Xbox.

If you are connected to the internet using WiFi, then forget the network and reconnect. Don’t forget your password to reconnect your network.

If your Xbox is connected to a switch or hub then unplug it from these and plug it directly into the router. In case it’s an issue with one of these causing the errors.

Try a different user profile on your Xbox in case there is a problem with the one you are currently signed into.

If you are using a wireless connection and able to use cable, then do this as it will offer a faster and more stable connection.

Try restarting your router. Just make sure that no one is currently using the internet as it will kick them off it.

We hope one of the above methods helped fix Call of Duty Modern Warfare 2 Beta not allowing you to log in to the game on your Xbox, and that you are able to now enjoy the beta!

If you did like this guide and found it helpful then we are sure you would like our other gaming guides.