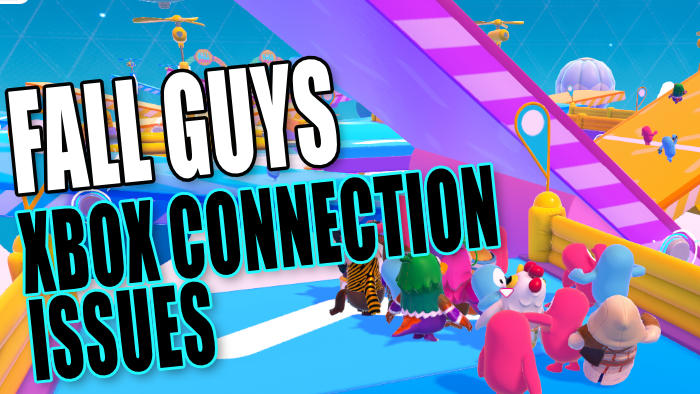 In this guide, we will be taking a look at fixing Fall Guys lag and connection issues on an Xbox. Are you trying to play this outstanding free-to-play game on either an Xbox One or Xbox Series X|S but keep getting disconnected or getting network errors stopping you from playing the game? Then don’t panic just yet as there are a few things that you can do that should get you playing Fall Guys shortly.

Fall Guys was not always free to play, but we feel making it a free game has sprung life back into the game giving us more opponents to try and beat to the finish line. Then trying to win in the final event is pretty addictive! This is all fun but if you are not able to play Fall Guys due to connection problems then the game will become pretty boring fast. So we have put together a list of different methods that you can do that should fix the issue you are having with the game.

There can be many things that cause Fall Guys connection issues and make it feel laggy and delayed on your Xbox console. For example, it could be due to maintenance happening on the Fall Guys servers, there’s an issue with your internet connection, or you do not have the latest version of the game installed on your Xbox.

So you will need to try each method below until one resolves the issue you are having. And hopefully, this will fix any of these connection problems in the game. In particular, the common error that pops up and says “Failed to login, please check your connection“.

Related: Fix Fall Guys crashing and not loading on Xbox

Below are the different methods for fixing connection issues with Fall Guys on an Xbox One or Xbox Series X|S console, and fingers crossed you will be enjoying the game again in no time without it keep disconnecting or getting stuck on the loading screen when trying to join an online multiplayer game.

Check the Fall Guys server status and make sure there are no problems. If the servers are not working properly then you will have issues such as “can’t connect to servers” or “Disconnected from the servers“, and other errors:

Make sure that you are signed in with the Xbox account that has the active online subscription. If you use the wrong user then that may be why Fall Guys can’t connect and keeps getting stuck on the connecting screen when trying to join others online.

You can check to see that the Xbox Live services are online and have no issues which could be affecting your game’s connection and making it disconnect or lag.

Fix 4: Check the connection to your Xbox

If your game is really laggy and delayed then it’s worth checking the connection speed that you are getting to your Xbox console:

Make sure that your system software is up to date, as the latest update could fix the connection issues you are having.

If you have any apps or games downloading or updating in the background then pause them, as this could make Fall Guys lag or may keep booting you out of the game.

Fix 8: Use an ethernet cable

If you are connecting to your Xbox wirelessly, then try plugging directly into your router. This will give you a faster and more stable connection, preventing lag, delay, and connection problems.

Try clearing the Xbox cache to see if that helps with the network issues you are having:

Check to see if there are any new patches or updates for the game, as this could fix the bug or issue that is causing your game to not connect or keep lagging out:

We hope the above methods have helped fix Fall Guys network issues and lag on your Xbox and you are now able to race everyone to the finish line trying to be the best within the game. Just don’t get too annoyed if you get knocked off into the slime!

If you found this guide helpful then we are sure you would like some of our other gaming guides.