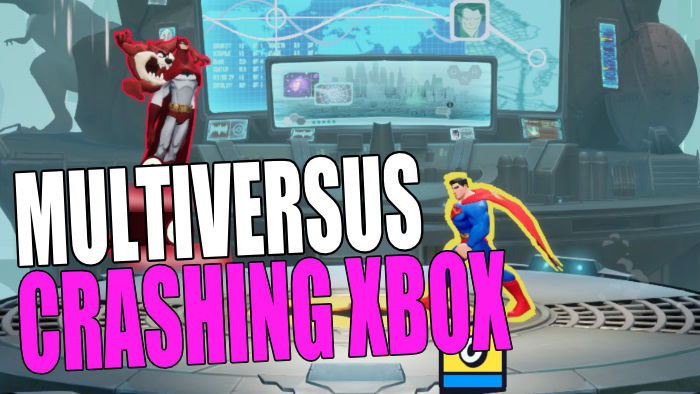 In this guide, we will be taking a look at how to fix MultiVersus crashing on Xbox. If you are not able to play this game due to it keeps crashing and getting stuck on the loading screen on your Xbox One or Xbox Series X|S then don’t worry just yet. There are a couple of things that you can do which should fix the crashing issues you are having with MultiVersus on your Xbox console.

When we first found out about MultiVersus we were extremely excited to hear we will be able to battle it against other players using some of our favourite characters such as Superman, Harley Quinn, Taz, and of course, Rick from Rick and Morty! And the game being free-to-play just added to the excitement. So below we have put together a list of different methods you can do that should hopefully fix MultiVersus on your Xbox.

Why does MultiVersus crash and not load on my Xbox

There can be many reasons why MultiVersus is not working on your Xbox One or Xbox Series X|S and keeps crashing. It could be a recent update for the game that’s added the issue and you will need to wait for another update to fix the problem, you don’t have the latest system update installed for your Xbox, or you just need to simply do a full shutdown on your console.

Below we have listed different methods that you can try which will hopefully get the game working on your Xbox again and stop crashing on startup or mid-game. Once you have tried each method you will need to move on to the next method until one resolves the problem you are having with the game.

It’s simple we know, but when was the latest time you fully turned off your Xbox? It could just be you need to do a full shutdown to resolve the crashing issues so shut down your Xbox and unplug the power cable as this will also clear the cache. Just leave it unplugged for more than 60 seconds.

If your Xbox is not up to date then this could cause issues. Plus having the latest update could add new features to your Xbox.

Make sure MultiVersus is up to date as the latest update could have patched the crashing issue you are having with the game.

Make sure you have enough space around your Xbox and it is not overheating. If it is move the console and you might need to clean the inside, but only do this if you know how as if you do it wrong you could damage the console.

Ensure you have enough disk space on the drive you have the game installed on whether it be internal or external storage. Low space could cause MultiVersus to crash on launch or to keep getting stuck on that loading screen:

If you are downloading or updating a game in the background while playing MultiVersus then pause these as they could be causing the crashing and not loading issues.

If none of the methods above helped fix MultiVersus on your Xbox then try reinstalling the game. And if you had it installed on an external drive install it to the internal drive within your Xbox:

We hope the above guide has helped resolve the crashing and not loading issues that you were having with MultiVersus on your Xbox One or Xbox Series X|S, and you can now enjoy the game.

If you found this guide helpful then we are sure you would like our other gaming guides.