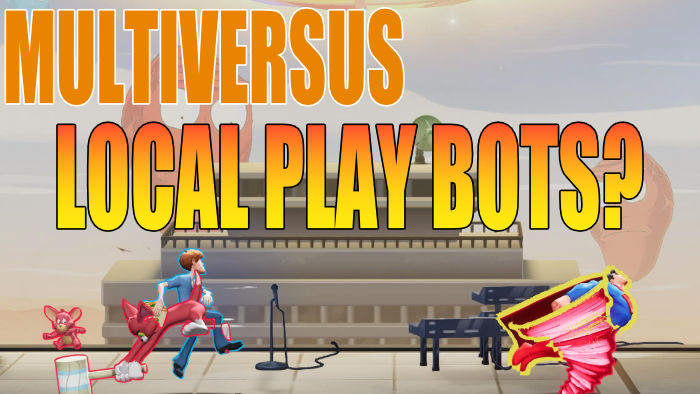 You are probably wondering if it is possible to play against MultiVersus bots in local play. Well, MultiVersus is a fantastic free-to-play game that has many different game modes such as local multiplayer and free for all, and lets you battle it out using different Warner Bros. characters.

So far the characters that are added are awesome like Batman, Wonder Woman, Taz, and Jake The Dog. And there are more characters such as Rick Sanchez and Black Adam coming soon! But one thing you have probably noticed when setting up local multiplayer on MultiVersus is that there is no option to add bots.

Related: Can you play 3 player in MutiVersus free for all local?

Can you add bots to MultiVersus local play?

At the time of writing this guide, it is unfortunately not possible to play Multiversus 2 player local vs bots, which is a real shame and we would love to see this within an update for the game in the near future!

In the meantime, you will have to just play with your friends in couch co-op as either 1 vs 1, 2 vs 2, or as free for all with 4 players.

MultiVersus does allow you to play against bots when by yourself which of course can be fun and great practice, but you cannot do this within local play and cannot add bots to local play free for all.

As you can see in the screenshot below we have 3 players added for free for all and it is not possible to add a bot as the fourth player, only another player with a controller can be added in local multiplayer mode.

So hopefully, the feature will be added soon as it would be really handy to be able to play local co-op vs bots for the times when you don’t have enough players, as you can’t play 3 players only in local multiplayer either.

Does MultiVersus have bots in-game?

Playing against the bots is a great way to practice before you challenge your friends locally, or other players online. Get those moves and skills to perfection, and get your characters leveled up ready to battle it out online!

We hope the above has helped. We know it’s not what you probably wanted to hear when it comes to playing on the platform that you are playing on.

And it is such as shame that currently, we are unable to play MultiVersus local play with bots. Fingers crossed for the future of the game!

If you enjoyed reading this then we are sure you would like our other gaming guides.