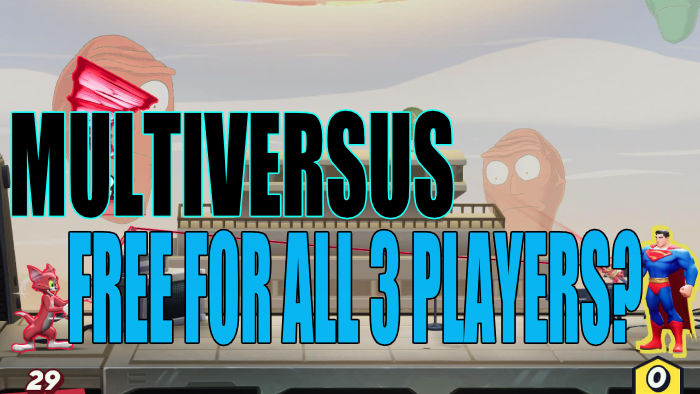 In this guide, we will be taking a look at MultiVersus 3 players in free for all. This awesome game is free-to-play and has many different game modes to try out. One of those one being able to play local multiplayer, so you can battle it out against your friends. But one question is, can you play MultiVersus free for all in with just 3 players or even 2 players?

MultiVersus is a game that we were keeping our eye on for a while as it looked very promising. And now the game is released it has given us what we thought it would and keeps up with our expectations.

But one thing that we are a little disappointed with MultiVersus is the fact that you can only play free for all with 4 players. And you cannot play with just 3 players, which we did not really expect would be the case.

Related: Can you add bots to MultiVersus local play?

Can you play 3 players on MultiVersus free for all local?

The game is great fun with a variety of game modes to choose from. Not only that but we have our favourite characters to battle it out with such as Wonderwoman, Harley Quinn, and Morty.

There will be more characters released in the near future for us to level up and use their special moves. So if you love this game then like us, you want to know how to play MultiVersus 3 player ffa?

Unfortunately, you cannot play 3 players only in local play in MultiVersus on any platform. As we mentioned above this is currently not available at the time of writing this guide. But we sure hope it will be added later down the line in a future update.

As you can see in the below screenshot, we have added 3 players to free for all local play, but you will receive a warning saying “Not enough players” and you will need another friend with a controller to join.

If you are wondering if it’s possible to add a bot to make up for the fourth player in local play free for all, then unfortunately again the answer is also no, you cannot play with bots in local play in the MultiVersus game.

We hope the above has answered your question about playing free for all in MultiVerus and that you must have four players with four controllers.

We know it’s probably not the answer you were hoping for and for now, all we can do is hope being able to play 3 players in MutilVersus local play becomes a thing in the near future.

If you enjoyed this guide then we are sure you would like our other gaming guides.