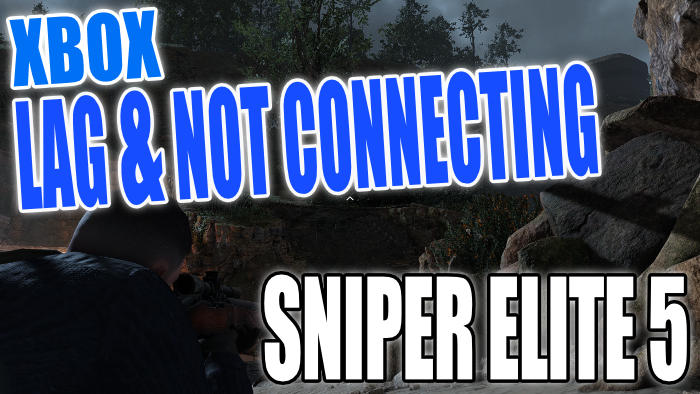 In this guide, we will be taking a look at fixing Sniper Elite 5 lag and connection issues on Xbox Series X/S or Xbox One. The Sniper Elite 5 game is a stunning game with lots to do. You can play online multiplayer, campaign missions, and even ask your friends to join in and play some Co-op, pulling off some awesome Sniper shots together. But this will be hard to do if Sniper Elite 5 keeps going offline, gets stuck on the connecting screen, gives a connection timed out error, or feels really delayed and laggy on your Xbox console.

There are plenty of game modes to keep you busy in this third-person tactical shooter game such as Axis Invasion or Survival, where you have to defeat endless waves of enemies. Unfortunately with any online game, you can have connection or network issues. So we have listed the methods below to hopefully fix the Sniper Elite 5 connection issues and lag you may be facing on your Xbox.

Why is Sniper Elite 5 lagging Xbox & stuck on connecting screen?

There can be many reasons why you are getting connection problems in Sniper Elite 5 on your Xbox console. You may have issues with the game not connecting when trying to play online multiplayer or may find you have really bad multiplayer lag in-game. We have also experienced network errors like “connection timed out” and “can’t connect to servers“.

It could be that your system software needs updating, the Xbox online services are having issues, or your internet provider is having issues.

Below we have listed different methods for fixing connection issues and network lag in Sniper Elite 5 on your Xbox. You will need to try each method until one hopefully resolves the issue you are having with the game.

Ensure there are no current issues on the official Twitter page, that could explain any “can’t connect” and “sever offline” errors.

Make sure that the Xbox Live services have no errors that could be causing your connection issues in the game.

Fix 3: Check you are launching the game on the correct user

Ensure you are signed in with the Xbox account that has an active online subscription to be able to play online, otherwise Sniper Elite 5 won’t connect and may just get stuck on the connecting screen.

Make sure that your Xbox is updated with the latest system update, as this can help resolve many issues.

Make sure that you are actually connected to the internet and that your Xbox is also connected, or the game will keep disconnecting if you are playing online multiplayer. It’s also worth checking that your internet provider does not have any issues in your local area when you are trying to play the game:

Give your router a reboot if possible to see if a restart fixes your connection or network problems in Sniper Elite.

If you are getting poor internet speed then your game will struggle and that is when you are likely to get “the connection to the game failed” or something similar, and experience multiplayer lag and delay:

Fix 8: Plug directly in with a cable

If you are using WiFi then try plugging your Xbox in directly to your router using an ethernet cable. The connection will be much more stable and less likely to disconnect or time out. Try to avoid using ethernet wall adapters if possible.

Check for updates for the game as the latest patch could help with the connection problems you are having:

Make sure you have nothing running in the background on your Xbox, any games downloading, or any updates installing. As these could be causing Sniper Elite to lag on your console.

Try clearing your Xbox cache to give it a refresh and then try launching the game again:

If all else fails, then you could try reinstalling the game on your Xbox, as one of the game files could have corrupted causing issues with the game:

That brings us to the end of this guide and we hope it fixed Sniper Elite 5 stuck on connecting screen and lagging your Xbox. Hopefully, you are now getting some decent slow-motion shots without getting disconnected back to the lobby or having server errors.

If the guide did help you and you enjoyed it then we are sure you would like some of our other gaming guides.