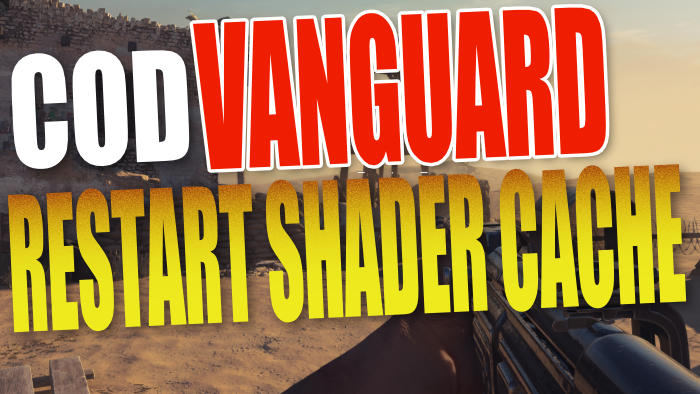 Call Of Duty Vanguard How To Restart Shader Compilation

If you have been enjoying Call Of Duty Vanguard on your PC or laptop but noticed that your graphics or textures are not quite right, then don’t panic because before you have to go through a big list of troubleshooting methods there is a quick and easy thing you can do to try and resolve these issues.

You can restart your shader cache within the Cod vanguard settings, to try and help fix your graphics or texture issues.

What is the shader cache?

When you first launch Vanguard the shaders are usually installed and compiled. Basically, the Shader Cache helps improve performance in the game when you are playing and helps with faster loading times, also reducing your CPU usage.

What Reinstalling the shader cache does?

If you did not have the shaders installed or there is an issue with them, then you may notice some stuttering in Cod Vanguard, especially in Multiplayer game mode or Zombies.

You can clear the Shaders cache and reinstall it to help to resolve the following issues:

Once the shader cache has been restarted, it will begin to compile Shaders again, which can then help improve performance in-game.

There is also sometimes an issue when you have the “Compiling Shaders” message. It could be a bug or an issue with your PC, but the message can get stuck on your screen and the shaders do not fully install or compile. By clearing the shader cache you can hopefully fix this issue as well.

When should I clear the Vanguard shader cache?

It is best to do this when you are having any of the issues that we mentioned above, to see if it hopefully fixes the issues before going through other troubleshooting methods.

We normally recommend restarting your Vanguard Shader cache after installing a new Graphics driver, or even after changing any graphics settings.

How to restart shaders compilation in Cod Vanguard PC:

So now you know what clearing the shader cache does why not try the following steps and hopefully this simple method will resolve your issues.

1. Launch Call of duty Vanguard > Click on Settings (can do this in multiplayer or zombies but will not allow you to do it if you are in a lobby)

2. Go across to Graphics > Select the Display tab > Click on “Restart shader compilation“

3. A message will pop up saying “Delete shader cache and restart compilation from the beginning?” > Click on Restart

4. You will now see a progress bar at the top saying “Compiling shaders to optimize performance during gameplay“(the same as when you first launched the game)

5. Once it has finished it will say “Shaders compilation complete!“

That’s how easy it is to clear and reinstall the shader cache in Vanguard. Hopefully, it helped you out and you are now playing the game without stuttering or graphics issues. If you found that your game was stuck on compiling shaders and the above methods did not fix it, then you can always try a scan and repair on Cod vanguard. You can also check our other gaming posts here.

Check out the video tutorial here on COD Vanguard Clear & Reinstall Shader Cache On PC if you are getting stuck.