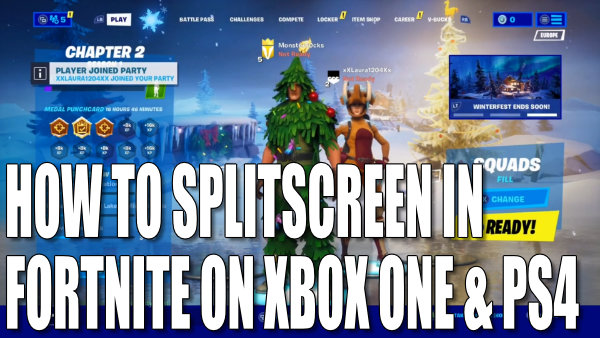 In this guide, we will be taking a look at how to play split-screen in Fortnite on your Xbox One or PS4. Fortnite is a great free-to-play game, and the goal is to be the last one standing and win that Victory Royale. You can play online in a solo match, as Duos, Trios, or even in a squad. So what makes it even more fun is that you can play 2 player split screen on the same console and same TV when playing Fortnite online multiplayer in Battle Royale mode.

To play split-screen in Fortnite Battle Royal on the Xbox One you will need two controllers and two Xbox accounts. And the same goes for the PlayStation 4, with two different accounts and two controllers.

Can both players level up in Fortnite split screen?

The answer to this question is yes. Player one and player two can both gain XP and level up individually when playing online multiplayer together. You can also work together to complete joint quests, making it easier to get those sniper headshots or hunting wildlife quests!

How to play 2 player split screen in Fortnite (Xbox One/PS4):

1. Sign into your user account on Xbox or PS4 and launch Fortnite (make sure you are in Battle Royale Mode and either playing Squads or Duos)

2. Plug in or connect your second controller

3. Now press the Xbox button or PS button on your controllers and sign in another user for the second player

4. Now on Fortnite you should see an option at the bottom of the screen saying “[P2] Log In (Hold)” > Hold A if using Xbox or hold ∆ (triangle) if using PS4

5. It will pop up with a logging-in screen and you should now see your second player on the screen

6. Press Y or ∆ to ready up and find a match and enjoy > You will now be in a Battle Royal game in split screen mode

That’s the end of our guide on how to play 2 player split screen in Fortnite on your Xbox One console or PlayStation 4 console. We hope you are now sitting back with your friend on the same console and getting that Victory Royale. Did you know it’s also really easy to play split-screen on a PS5 in Fortnite as well?

Check out the video tutorial here on How To Split Screen In Fortnite Battle Royale On Xbox One & PS4, if you are getting stuck.