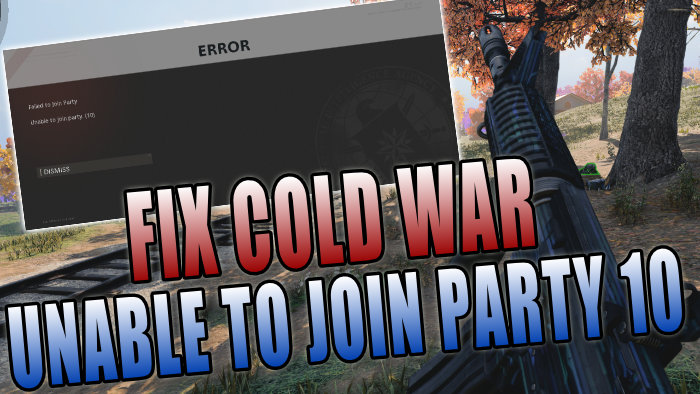 COD Cold War is another awesome game available on PC and console. We do now have the free-to-play Warzone Pacific and also COD Vanguard, but if you are anything like us then you will still like the older COD games and still want to jump into a game of Zombies or beat your friends in Multiplayer online.

In this guide, we will be taking a look at fixing the Cold War Failed to join party errors and hopefully have you back into a game in no time at all. It’s much more fun playing the Call Of Duty Games with your mates, so it’s no good if you can’t join!

What is the Cold War Failed to join party 10 error?

This error will pop up when you are trying to join a friend’s party or a lobby within Call Of Duty Cold War, regardless of whether Cross-play is enabled or not. These error messages can even happen when you are just trying to search for online zombies or multiplayer games.

The error message will give you a warning and will say something similar to:

Why Am I Getting Call Of Duty Black Ops Cold War Party Errors?

There are a couple of reasons why you might be getting the “Failed to join party” 10 error. It could be that the party or lobby has glitched which is stopping you from being able to join your friends or any online game.

The COD Cold War game may have decided to bug out, or you have not got the correct game files installed for the game mode that you are trying to join.

Try the methods below and after each step try launching the game and see if you can join your party or a lobby that you previously could not join.

It may sound simple but in most cases, this actually resolves the issue that is stopping you from joining your friend’s party, or not being able to join a lobby in Cold War

2. Completely restart your PC or Console:

A simple method again but it might be an issue in Windows or your console that is causing the problem so a restart could help in getting rid of the error messages.

3. Ask everyone in the party you are trying to join to reboot their game:

If they are the host then it could have glitched everyone’s game which could be stopping you from being able to join them.

4. Get someone else to try hosting the game and party in Cold War:

5. Ensure you have the correct game files installed for the game you are trying to join

If you are playing the Cold War PC version then it could be that one of the game files has become corrupted or missing, so you can try doing a scan and repair:

That’s the end of our guide to fixing join party errors in Cold War. Hopefully one of the methods helped you out, and if you are having connection issues with the game and cannot connect to the online services then check out this guide here.

If you are still having problems with Call Of Duty Cold War giving you error messages saying; Failed To Join Party (10), Cannot Join The Zombie Lobby, or Cannot Join The Multiplayer Lobby until the content is downloaded and installed, then you may have to try reinstalling the game on your PC or Console!