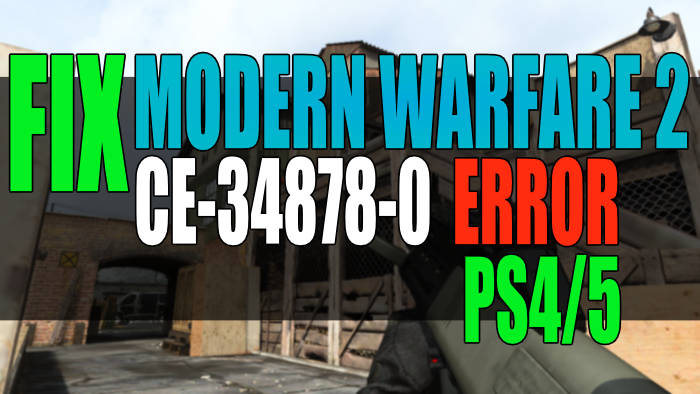 In this guide, we will be taking a look at how to fix the Call of Duty Modern Warfare 2 CE-34878-0 error on PS5/PS4, when playing the Beta. This message will say something like “An error has occurred in the following application” and can happen when trying to play the game.

It can happen when trying to launch Modern Warfare 2 or even randomly when you are playing in the middle of a match, crashing to the home screen with the error CE-34878-0. This is very annoying however, you have to remember the game is currently in Beta which means it is going to have its problems. But there are some things you can do that should help fix the Call Of Duty Modern Warfare 2 error CE-34878-0 on your PS4 or PS5.

The beta is finally here for COD MW 2 on PlayStation 4 and PlayStation 5, but that does not suggest that we are all getting to play the game. And seeing as you are on this guide, then that means that your Modern Warfare 2 Open Beta is crashing with a CE-34878-0 error. Luckily, there are a couple of things that you can do that will hopefully get the game working again.

A couple of things can cause the CE-34878-0 error code in Modern Warfare 2. It could be the game files being corrupted, your PlayStations database has messed up, or it could even be an issue with your console’s cache.

We know some of these things sound a little scary but don’t worry it is not too difficult to resolve these problems on a PlayStation console.

Below are the different methods for fixing the CE-34878-0 error in Cod MW2 on a PlayStation 4 or PlayStation 5. You will need to do each method until one resolves the issue for you.

Check if there are any new updates available for your PlayStation system. If there is a new update then install it:

Clear your PlayStation console cache files. Don’t worry this will only remove old temp files which will then be regenerated:

If there is a problem with your PlayStation 4/5 database then this is going to cause issues and can cause the CE-34878-0 error:

If none of the above methods helped fix Modern Warfare 2 giving you the error then the next thing to do is try reinstalling the game.

We hope one of the above methods helped fix the annoying Modern Warfare 2 CE-34878-0 error message that you were receiving on your PlayStation. And you are now able to sit back and enjoy the beta!

If the above guide did help you then we are sure you would like some of our other gaming guides.