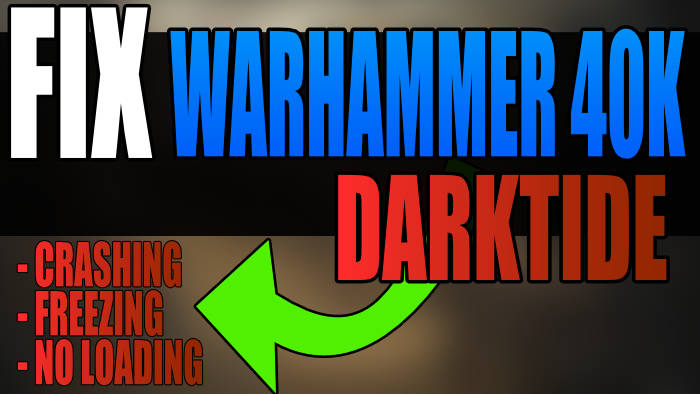 Warhammer 40,000 Darktide is another Warhammer game and is brutal at times, just like the previous games. As we have to shoot and hack our way through numerous amounts of different enemies, and I love it! But seeing as you are currently reading this guide then this means that you are having issues with the Warhammer game not working. So below are the methods to fix the game on your computer or Xbox.

How to fix Warhammer 40,000 Darktide crashing on PC

I have listed below the different methods to help you troubleshoot and fix what’s causing Warhammer Darktide to keep crashing on startup and mid-game, or if it just keeps freezing on a Windows 10 and Windows 11 PC or laptop.

When a game keeps crashing on a PC the first thing you want to check is that your system meets the minimum requirements to play the game. If it does not then that would explain why Warhammer 40K Darktide is crashing or not loading.

If you are unsure of how to do this I have listed some guides below that will help:

There could be a problem with the current Windows user that you are signed into. So try switching to a different profile.

If you don’t have one then create one, but ensure it is an administrator account.

What graphics settings are set within the game? If you have turned them up to the max or they have automatically been set too high, then your computer could be struggling to run the game causing Warhammer 40,000 Darktide to crash, or it could even cause a bluescreen!

Change your graphics settings to the lowest setting then jump into the game and see how it runs. Then slowly increase the graphics until you have the same problem, then use the settings before the game crashed.

Try running the game with administrator privileges. This can be easily done as long as you are signed in as an administrator. And this will just give the game extra privileges and can help fix many crashing issues when trying to play games on Windows 10/11 computers.

If one of Warhammer 40,000 Darktides game files has become damaged or missing then you are going to run into hundreds of different problems. Lucky for us, we can check if this is what’s causing the game to not work using Steam.

How to fix Warhammer 40,000 Darktide crashing on Xbox Series X|S

Below are the different methods to help you troubleshoot what is causing the game to keep crashing or getting stuck on the loading screen on your Xbox Series X or Series S.

When was the last time you manually checked to see if an update is available for your Xbox Series X|S? Probably never or it’s been a while! But there could be an update available that helps fix Warhammer 40,000 Darktide crashing on your Xbox.

Fix 2: Check Warhammer 40K Darktide is up to date

Make sure there isn’t an update available for the game as Fatshark might be aware of the problem that you are having and released a patch to fix it.

There could be a problem with the cache files for your Xbox Series X|S. Luckily, we can clear these files. I know it sounds scary but don’t worry it’s easy enough to do. And this won’t remove any important data from your console, only temporary cache files.

Try swapping to a different Xbox profile as there could be an issue with yours that’s causing Warhammer 40,000 Darktide to crash or not load at all. When you do switch profiles, ensure you have signed out of your other profile first.

I hope the above guide has helped and got the epic Warhammer game working on your PC or Xbox Series X|S, and you can now get back to enjoying this brilliant game.