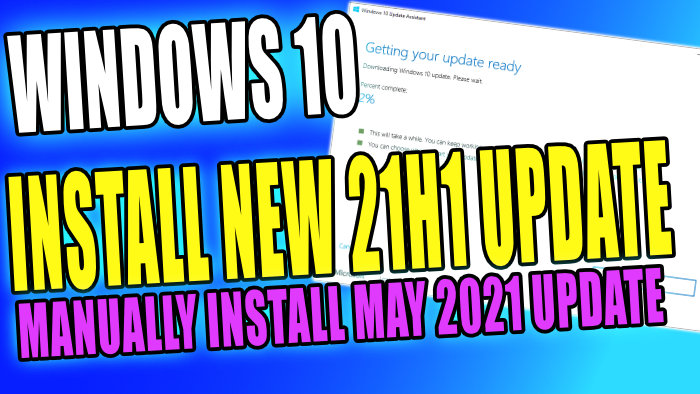 The new Windows 10 21h1 feature update has now been released, which is also known as the May 2021 update. It adds new features to Windows 10 such as; Windows hello multicamera support, Windows Defender improvements, Group Policy Service, and also Windows Management Instrumentation improvements.

There are two ways of installing the Windows 10 21h1 update; You can either do it through Windows updates or manually. The time it takes to do this Windows update will be determined by your internet connection and system and we would recommend that you ensure you back up any important files before doing the update.

The 21h1 update might be missing from your Windows updates so if this is the case then don’t worry because we will also show you how you can download and install the 21h1 (May 2021 Update) manually as well.

After installing 21h1 to your Windows 10 computer Microsoft has now also released 21h2, so you might want to think about updating to this version.

Installing the latest version of Windows 10 is very important as it will ensure that Windows is using the most stable and secure version. This can help improve the speed of Windows 10, remove previous bugs and also make your system more secure from security threats. Also, ensuring Windows defender is up to date can also help with this.

What Is A Windows 10 Feature Update?

Feature updates are not as common as regular updates for Windows 10 as they often add more features. However, that’s not to say other updates don’t add new features like when the weather forecast was added to the Taskbar.

How To Install 21H1 Update Through Windows Updates:

3. If you can install the Update through Windows updates you will see an option to install the 21H1 update so go ahead and install it > Restart your PC Once finished installing

How To Install 21H1 update manually:

4. Once downloaded run the Update assistant and click on “Update now“

5. Now follow the install steps and then the update assistant will begin to update your Windows 10 to version 21H1

That’s how you can install the new Windows 10 21H1 update. We hope you enjoyed this guide and the updating went smoothly on your computer.

As we said above, you can now also install 21H2 so if you would like to know how then check out this guide. Also, if you did enjoy this guide then we are sure you would like our other Windows 10 guides.

Check out the video tutorial here How To Manually Install Windows 10 21H1 May 2021 Feature Update if you are getting stuck.