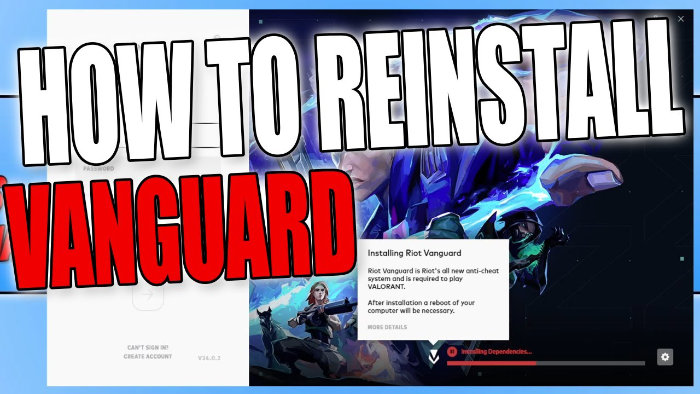 If you are unsure of what Vanguard is, it’s an anti-cheat system that detects people that are using cheats when playing Vanguard Riot games online. So it is a requirement to have Riot Vanguard installed to be able to play games like Valorant online.

Have been experiencing problems with Riot Vanguard such as it’s not working correctly, you are unable to launch one of the riot games because it’s not detecting Riot Vanguard installed on your computer, or you’re just getting error messages.

Reinstalling Vanguard might help resolve those problems. You can see within Task manager if the Vanguard user-mode service is running as shown in the screenshot below.

So whether you simply just want to uninstall Riot anti-cheat as you do not play any games that require the service, or you want to install it as Riot Vanguard is missing on your Windows 10 PC, then this can easily be done by following our steps below.

What is Riot Vanguard?

This is an anti-cheat service that helps to prevent players in games from cheating or hacking, which as we all know can ruin the whole fun when playing a game online!

The games that implement Riot Vanguard as their anti-cheat system make the game more enjoyable, as you don’t have to quit and then try to rejoin another online game every time someone is cheating in the game and ruining the experience.

Is Riot Vanguard install required to play a game?

You do not need to have Riot Vanguard installed on your Windows 10 PC or laptop, especially if you do not play any games that require the service. However, if you install a game on your computer that uses it then you will need it installed to play the game online.

If you are having issues with the Riot Vanguard service, then one of the best fixes is to uninstall and then install it again in Windows 10. Vanguard anti-cheat can cause a variety of issues such as:

How to uninstall Riot Vanguard on PC

Now you know a little about the service, let’s take a look at how you can uninstall Riot Vanguard in Windows 10. Hopefully, it will fix any issues you have been facing.

2. In the box that says “Search this list” type “Riot Vanguard“

How to install Riot Vanguard on PC

Now you have uninstalled Riot Vanguard, if you wish to install it again then you will find the steps below.

1. Go ahead and launch a Riot game such as Valorant and this will load the Riot Client

2. This will then download Riot Vanguard and it will begin to install on your computer

3. Once Riot Vanguard has been installed you will then need to restart Windows for the installation to be completed

There you have it that is how you can easily install Riot Vanguard or uninstall it. We hope this has resolved any issues you have been facing with Vanguard anti-cheat on your computer or made your life easier.

If you are still getting problems then just ensure you have allowed Vanguard access through your firewall.

Check out our YouTube video here on How To uninstall and install Riot Vanguard if you are getting stuck.