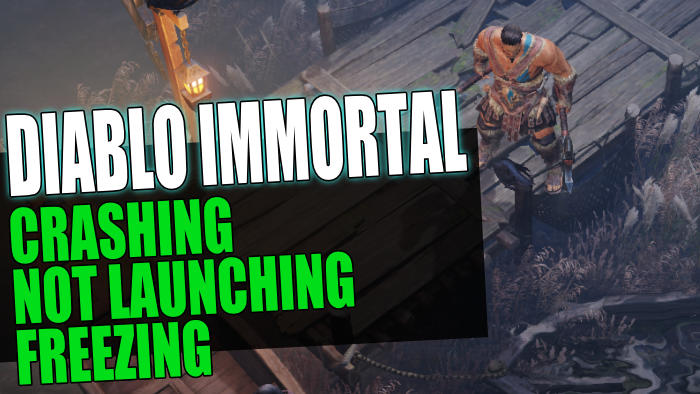 In this guide, we will be taking a look at how to fix Diablo Immortal crashing and freezing on your Windows PC or laptop. We have been very excited for the next Diablo game from Blizzard, and it’s great fun trying to level up your character and complete quests and battles, and the Barbarian was my first choice. But it’s very frustrating if you are having issues with crashing or freezing in Diablo Immortal, or the game is not loading on your PC.

Diablo Immortal is free to play on PC but can also be played on mobile if your phone meets the minimum requirements. This game is great fun but if you are not able to play Diablo Immortal due to crashes, errors, or it keeps freezing then hopefully one of the methods below will fix the issue and get you playing the game shortly.

Why does Diablo Immortal keep crashing?

There can be many reasons why Diablo Immortal keeps crashing on startup or mid-game. For example, it could be as simple as not having the latest updates installed for Windows and Diablo Immortal, a common cause is a program in the background is conflicting with the game, or one of the game files has become corrupt or missing.

Any of these causes can make Diablo immortal crash, get stuck on the loading screen, freeze, or give you an error. So hopefully you will get to the bottom of why your game is not working on your Windows computer.

How to fix Diablo Immortal crashing on startup & freezing on PC

Below are the different methods for hopefully resolving the crashing, freezing, and launching issues that you are having with the Diablo Immortal on your Windows 10 or Windows 11 PC or laptop. After trying each method, if it did not help move on to the next step.

If your system does not meet the minimum required PC specs to play the game, then it’s not going to launch and will crash on startup.

Check that Windows is up to date. This is important for not only security reasons but can also fix known issues with the operating system.

Make sure you have the latest driver installed for your graphics card as not only can this help with performance but also help stop Diablo immortal crashing:

If you don’t have the latest DirectX files on your computer then this could be a problem:

If you have overclocked any of your hardware then remove these settings if you know how to, as they could be conflicting with the game making it freeze.

Close down all programs and apps running in the background when playing Diablo Immortal as they could be conflicting with the game causing it to crash.

Change the Windows power plan to high performance or ultimate performance, to give it more power to help run your games.

Giving the game extra administrator privileges can resolve many problems with games crashing on launch:

If you have installed a third-party security program then this could be blocking the game making it crash. Try disabling it for a short period of time then test the game. Just remember you won’t be protected from threats while it’s off, but some security programs have a passive mode or game mode you could try.

If one of the game files has become corrupted or missing then the game is going to have issues. Luckily we can check all this using the Blizzard launcher:

Try deleting the Battle.net cache, to see if clearing the cache helps fix your issues:

As above with closing down background apps and programs, make sure that you have no overlays running or in-game overlays. Having Discord running while playing Diablo Immortal seems to be a common issue for it crashing the game, so try closing it all down.

If you have changed any settings in the game then this could be causing Diablo Immortal to crash and not load. So renaming the config file will refresh and reset these settings, hopefully allowing the game to work again:

We hope the above methods helped get you back into Diablo Immortal and fixed the problem that you were having with the game crashing, freezing, not loading, or even if it won’t launch. If you are still having the same issue then you might need to wait until another update is released for the game that could resolve the issue, or you might have to reinstall the game.

If this guide helped then check out our other gaming guides here.

Check out the video tutorial here on How To FIX Diablo Immortal Crashing & Not Launching On PC if you are getting stuck.