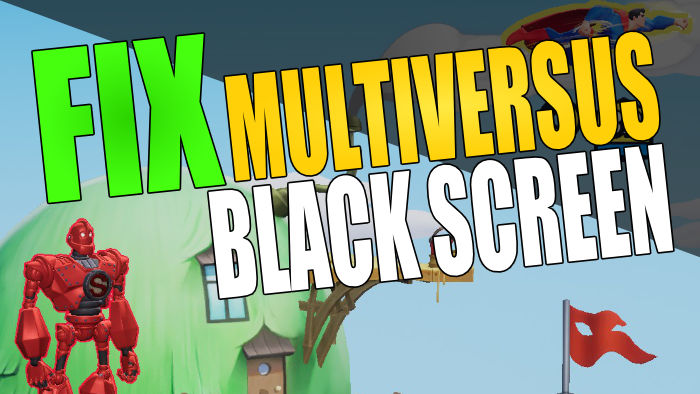 In this guide, we will be taking a look at how to fix MultiVersus black screen issues on Xbox, PlayStation, and PC. If you are trying to play this free-to-play game but keep getting a black screen every time you launch the game or perhaps crashing to a black screen while playing, then don’t worry. There are a few things you can do to hopefully fix the display issue you are having.

Multiversus is a great Mario smash bros alternative, and to top things off it’s free to play making it very appealing! The time we have currently spent within the game has been very enjoyable but encountering a black screen or no display output when playing can become quite frustrating.

But luckily there are a few things you can do that should get the game working again on a Windows PC, Xbox One, Xbox Series X|S, PS5, and PS4.

What causes a black screen in MultiVersus?

For example, if you are playing MultiVersus on a PC it could be due to not having the latest driver installed for your GPU. Or for console players, it could be the resolution you have set within your console causing the issue.

Related: MultiVersus can you play against bots

How to fix MultiVersus black screen

Below are the different methods for fixing MultiVersus black screen on all platforms such as PC, Xbox, and PlayStation.

The first thing to do is just ensure the platform you are playing MultiVersus on is up to date.

If you are trying to play the game on Windows and getting a black screen on MultiVersus PC, then ensure you have the latest driver installed for your NVIDIA or AMD graphics card:

Check if there are no new updates available for MultiVersus. If there are then this could resolve the black screen issue that you are having.

Try changing the resolution you are using, so either lower it or raise it.

Change the display cable you are using as there could be an issue with it that’s causing the black screen. If you don’t have a spare cable to hand then just unplug the display cable then plug it back in securely.

Just check the source for some reason has not changed on your monitor upon loading MultiVersus.

If none of the above methods helped fix MultiVersus black screen on your PC, Xbox, or PlayStation then one of its game files could have become corrupted. So the next thing to do is try reinstalling the game back onto your device.

We hope the above guide has helped fix the MultiVersus black screen issues on the platform that you were trying to play the game on. And you can now carry on defeating other players in this manic game!

If you enjoyed this guide and found it helpful then we are sure you would like our other gaming guides.