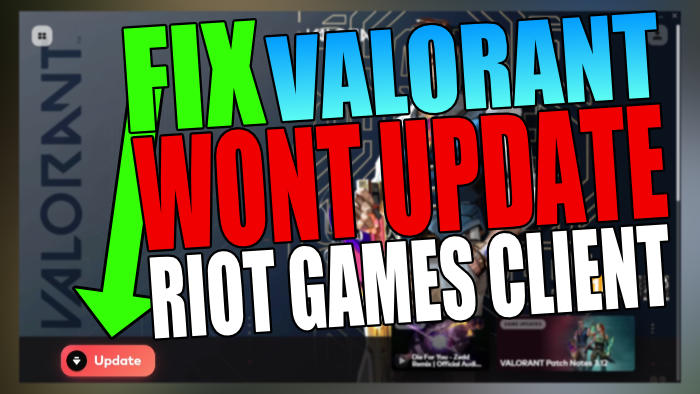 In this guide, we will be taking a look at why Valorant will not update in the Riot Games client on your PC or laptop.

As you may have already noticed, if you can’t update Valorant then you will not be able to play the game! So it’s important to get the Riot Games launcher to update it, so you can jump back into the game ASAP.

Below we have listed a few different things which you can do that will hopefully resolve the Valorant game not updating on your Windows computer.

What Is Riot Games Client:

It’s not only used for launching the games but it is also used to keep the games up to date. It will also ensure that Riot Vanguard is also up to date on your Windows computer which is used to help prevent cheaters with Riot games.

There can be a few different things that are causing the game to not update through the Riot games client. But it’s normally just a little hiccup, and don’t worry you should not need to reinstall Valorant to fix the problem as that will be the last method.

How To Fix Riot Games Client Not Updating Valorant PC:

Below are the different methods for fixing Valorant not updating in Windows.

Once restarted then try launching Riot games and see if the update works.

Running the Riot client as an admin can help if it’s having issues with writing/updating the files.

Try using a different local user on your Windows computer and see if you can update Valorant through that user.

One of the Valorant game files might have become corrupt or missing so try doing a scan and repair.

Fix 5: Uninstall the game and install it again

Once you have tried the methods above you should now be able to play Valoranrt again on your computer.

We hope the methods above helped fix Valorant not updating in the Riot Games Launcher. If you found this guide helpful then we are sure you would like our other gaming guides.

Check out the video tutorial here on Riot Games Client Update Valorant Not Working On PC, if you are getting stuck.