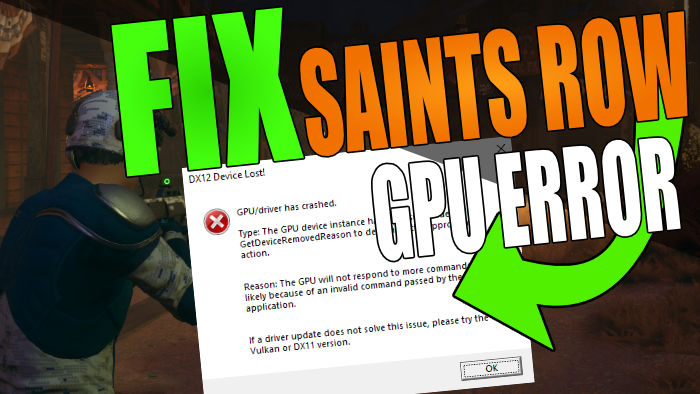 Don’t panic just yet as the chances are you just need to update your graphics card driver, which we will show you how to do below. And if you already have the latest driver then we have other things you can try as well.

So far the time that we have spent within the game has been enjoyable despite the occasional Graphical issue in Saints Row. Although there are a few things you can do to sort out some of the graphics issues, we may just need to be patient and wait for them to be fixed.

But seeing as you are on this guide, then that means you are having issues with Saints Row crashing due to your graphics driver. So below we have put together different methods you can do to fix this.

What is the DX12 Device Lost error in Saints Row?

The warning can pop up when you launch the game, or when you are in the middle of causing havoc and driving around! It will keep crashing Saints Row and you can press ok on the error windows but the game will usually close. As we mentioned above, it is more than likely caused by not having the latest video driver installed for your GPU.

The Saints Row driver error will say the following:

“DX12 Device Lost!
GPU/driver has crashed.
Type: The GPU device instance has been suspended. Use GetDeviceRemovedReason to determine the appropriate action.
Reason: The GPU will not respond to more commands, most likely because of an invalid command passed by the calling application.
If a driver update does not solve this issue, please try the Vulkan or DX11 version.”

How to Fix Saints Row GPU driver has crashed

Below are the different methods to fix the GPU/driver has crashed error message in the Saints Row reboot, on your Windows PC or laptop.

Make sure you have the latest graphics driver installed:

Related: Check your PC specs & find out what graphics card you have

Below are step-by-step guides on updating graphics drivers with screenshots, if you need more help.

Check you have the latest version of DirectX installed on your Windows 10 or 11 PC:

Change the version you run Saints Row in:

We hope the above helped fix the Saints Row GPU crashing error on your Windows computer. If you are still having issues then it could be one of the game files has become corrupted so you can either try to repair them or reinstall the game.

If this guide helped then we have more gaming guides here.