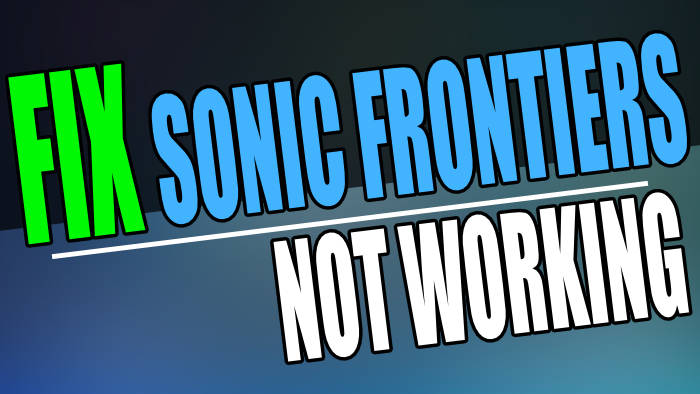 Sonic Frontiers is a game that I have been looking forward to! Just like Disney Dreamlight Valley which I also have written a guide on crashing problems, it has many adorable characters within the game and brings back many memories.

Within Sonic Frontiers you are stranded on an ancient island with many different creatures that you have to battle. It’s a massive open-world game and very enjoyable. But just like many open-world games it has its problems, which is why you are reading this guide.

Many things can cause Sonic Frontiers to keep crashing on a Nintendo Switch, Xbox, PlayStation, and PC. For example, it could easily be that one of the game’s files has become corrupted during the installation of the game or due to a recent update.

How to fix Sonic Frontiers crashing & not working

I have listed the different methods for fixing Sonic Frontiers below on a Windows 10 or Windows 11 PC or laptop, PS5, PS4, Xbox One, Xbox Series X|S, and Nintendo Switch.

You will need to go to the device that you are trying to play the game on, then try each method until one resolves the issue you are having.

I have listed the minimum system requirements to be able to play Sonic Frontiers on your Windows PC below. If you do not meet these requirements then you are going to encounter problems with the game not working:

I have listed guides below on how you can update your GPU driver.

Check if there are any new updates available for Windows. If there are then install these.

You could also manually check for a new feature update in Windows 10.

Close down all programs and apps before launching Sonic Frontiers as one of these could be conflicting with the game causing it to crash on startup and not work on your PC.

Within Windows, we can set the graphics performance for programs, apps, and games. So it’s worth setting Sonic Frontiers to use the High-Performance option just in case. By default, it’s using the power-saving option.

I know it sounds very simple but turning off your PlayStation and leaving it off for a few seconds can fix many problems as it will give the console a fresh start when you turn it back on again. Make sure your PlayStation is not in rest mode and it is completely off.

When you do turn off your PlayStation you could always switch it off at the mains also for a few seconds.

When was the last time you checked to see if there is a new system update available for your PlayStation? There could be one available that patches the issue that you are having with the game.

Check and see if there are any new updates available for the game.

Clearing the PlayStation cache files can help fix many problems and it’s easy enough to do when following the below steps. Don’t worry this will not remove any game save files.

If there is a problem with your PlayStation database then this will not only cause issues with the console but it would also explain why Sonic Frontiers keeps crashing. Luckily, we can easily rebuild the database.

If the saved data for the game has become corrupted then this will stop the game from loading and cause it to crash. So try removing the saved data and then test the game.

Just make sure you back up the data first in case it is not your saved data causing the issues.

Restart your Xbox One or Xbox Series X|S then try launching the game again. This can help resolve many problems when games stop working correctly.

If you have not checked for any system updates on your Xbox in a while then there could be one available that fixes the issue that you are currently having with the game not working or loading.

Check if there is a new update available for the game as it might contain a patch for the problem that you are having with the game.

If one of the Xbox One or Xbox Series X|S cache files has developed a problem then this can cause problems not only within the console’s menus causing them to be slow, etc but also cause Sonic to not work.

If the game’s saved data has become corrupted then this is going to stop the game from working and bring up errors. Luckily, we can remove the saved data and then test the game.

Just be sure to back up your data before doing this.

I know this sounds very simple but just doing a simple shutdown of your Nintendo Switch and then turning it back on will give it a fresh start, and can help fix many problems.

Check if there is a new update available for the game as it could have the fix for the Sonic Frontiers not working on your Nintendo Switch.

If there is a problem with one of the cache files for your profile on the Switch then this could cause problems with the game. So it’s definitely worth clearing your profile cache. And don’t worry this will not remove any of your saved data.

If your saved data has unfortunately become corrupted then this will stop the game from working. So first back up your Nintendo Switch saved data then remove it, and try launching the game. If you are still having the same problem then you can restore the saved data.

If one of the game’s files has become corrupted or missing then this will stop Sonic Frontiers from working on your Nintendo Switch. Luckily we can easily check if this is the case within the Switch settings.

I hope one of the above methods helped fix Sonic Frontiers not working on your Switch, Xbox, PlayStation, or PC. And you are now able to enjoy this awesome open world without any problems.

We have plenty more gaming guides here if this helped you out.