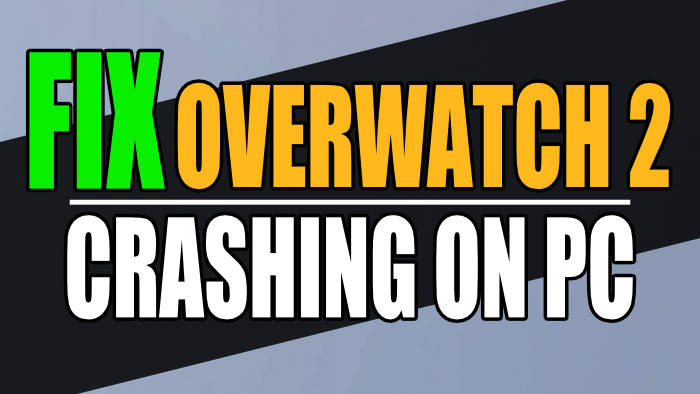 Overwatch 2 is a sequel action shooter game, designed by Blizzard Entertainment. It lets us battle 6v6 while completing objectives with our chosen hero. The first Overwatch game has now had its servers shut down, to make way for this awesome game, which is free-to-play making it even better! But if you have been having Overwatch 2 crashing PC problems and the game is freezing, then this can be very frustrating.

Overwatch 2 is a fantastic free-to-play game that lets us battle it out in PVP using different heroes, and boy there are a lot of different heroes to choose from! They all offer different roles such as support, damage, and tank. I myself prefer the support role just like in other games like Battlefield. The last thing you want to be doing is trying to fix Overwatch 2 crashing, just so you can play it! Luckily the methods I have listed are not too difficult or time-consuming.

But below I have listed the different methods you can do to fix Overwatch 2 randomly crashing and even restarting your Windows 10 or Windows 11 PC. You will need to do each method until one fixes the problem you are having.

Why is Overwatch 2 crashing on startup?

There are many reasons why you are having Overwatch 2 crashing PC issues and it has decided to not work on your Windows computer. For example, it could be that your system does not meet the minimum requirements to play the game, or not having the latest driver installed for your NVIDIA or the latest AMD graphics card driver installed could cause problems.

It could even be that one of the Overwatch 2 game files has become corrupted or missing, causing crashes and launching issues.

Below are the methods to help fix Overwatch 2 crashing on startup, the game freezing, and not loading. Whether it keeps crashing on startup or mid-game, you will need to try each one until one fixes the problem you are having with the game.

It’s important to ensure Windows is up to date and doing so could also fix Overwatch 2 crashing.

Graphics drivers can be the culprit of many issues on your PC, especially crashing, freezing, and not launching in games like Overwatch 2. They can also cause graphics issues and error messages like “rendering device lost“. So make sure you have the latest driver installed for your NVIDIA, AMD, or Intel graphics card:

If you have already tried updating your GPU driver and had no luck, then it may be worth installing an older GPU driver version to see if this helps. As your current driver may have compatibility issues or be conflicting:

Make sure you don’t have any programs open before launching Overwatch 2 as they could be conflicting with the game causing it to crash. This includes programs like OBS Studio, Discord, MSI Afterburner, Razer Cortex, RGB changing software, etc.

Unplug all devices from your PC/laptop as they could also be the cause of why you are having issues with the game. So if you have a headset, microphone, webcam controller, etc plugged into your computer, then unplug these devices.

If your power plan is only on balanced or power saver, then your game may struggle to run. So why not change to high-performance to give it a try:

If Overwatch 2 keeps crashing then try turning on Game Mode in Windows. This can help with crashing, freezing, and loading issues in a game.

If you already have Game Mode on, then try disabling it in case it’s conflicting with something on your PC.

If you have files or data stored in your PC cache then something could be conflicting or if a file is corrupted then no wonder Overwatch 2 is crashing on startup.

Luckily, we can clear the DirectX shader cache and also GPU cache files in Windows.

We can easily clear the DirectX cache in Windows 10 and also the Windows 11 DirectX shader cache by doing the following steps:

We can also remove AMD cache files to help with Overwatch 2 crashes:

If you have an NVIDIA GPU then we can clear the NVIDIA cache files and shader cache:

Third-party security software is something that can cause massive problems when it comes to playing games on a computer, especially if it’s an online game like Overwatch 2. So if you have Avast, Norton, McAfee, 360 Total Security, etc then put your security program into a passive mode/game mode, disable it, or alternatively you could try uninstalling it. (Just keep in mind that if you disable your security program you might not be protected from threats!)

You may have already tried clearing the DirectX shader cache and GPU cache files that I mentioned above, but if Overwatch 2 keeps crashing still on your computer then try clearing the Battle Net app cache:

Overwatch 2 not launching could be a result of a setting that you have set within the game. Luckily, we can easily rename a folder that has the settings stored within, and doing so will reset all your Overwatch 2 settings back to their original default values:

We can verify the integrity of the game files using the Battle.Net app to scan for and repair any Overwatch 2 game files that may have become corrupted on installation or during an update:

Check and make sure that you have the latest drivers installed for PC hardware. So things like your Mouse, keyboard, network adapter, motherboard, processor, etc need to be up to date.

The best place to get the latest driver is the manufacturer’s website, and I have listed a couple of these below:

If you are still having issues with Overwatch 2 crashing and freezing on your Windows PC, then you may have to, unfortunately, uninstall the game from the Blizzard Launcher. And then install it again, to see if this fixes your issues.

We hope one of the above methods helped fixed your issues if Overwatch 2 keeps crashing and not working on your Windows 10/11 PC, and you are now able to sit back and enjoy the game!

If you liked this guide then we are sure you would like the other gaming guides we have written.